Some days call for a switch to Plan B.

On May 4, we arrived in Torrey, Utah to rain and thunder. 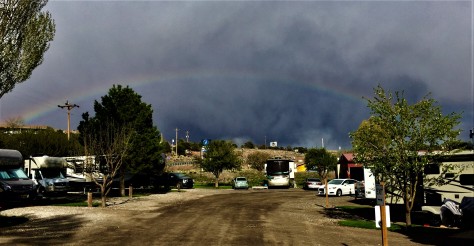 Once the storm headed east, we received our traditional rainbow after a family member arrives in heaven.  This tradition began in 1980 with my aunt requesting one from my grandfather and has continued without fail ever since. Thank you for the sign, Uncle Bob!

The next day, after a stop in the visitor center at Capitol Reef National Park, we headed into the preserve to do some exploring. 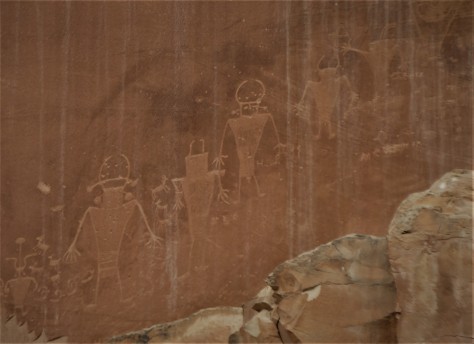 Our starting point was located in the former Mormon settlement of Fruita.  In that community, there is a pull-off along Utah 24 that has some amazing petroglyphs.  A boardwalk leads along the rock wall they are carved into.  We spent a good half hour viewing these drawings, attempting to decipher what they meant.  While we were there, a large group of Italian tourists stopped, all marveling in their own language at what they were seeing.  After returning to the parking lot, we saw that they had not been traveling on a tour bus.  Quite to the contrary… 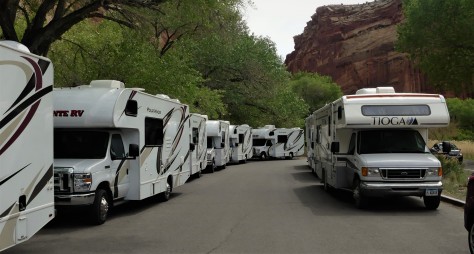 …they were exploring in a line-up of Class C motorhomes.  They sure seemed to be having a great time.  🙂

Our next stop was to Gifford House, just south of the visitor center. 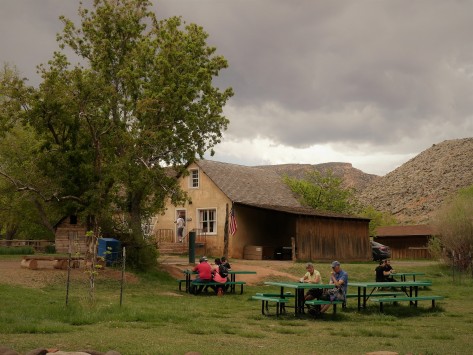 This is a former farmhouse that now doubles as a museum and store.  Diana purchased one of their small pies, and I got some homemade ice cream and a couple of gluten free cookies.  Delicious!

Capitol Reef’s claim to fame is the 100 mile long “waterpocket fold” that runs from Thousand Lake Mountain south to Lake Powell.  The fold is basically a fault in which the uplifted rock traps pockets of water behind it. The long, slender park is filled with hikes through slot canyons and over sandstone ridges.  We drove the 8 mile paved Scenic Drive, looking over possible hikes as we went.  At the end, a dirt road to Pleasant Creek continued onward.  This route was recommended to us by one of the rangers at the visitor center. 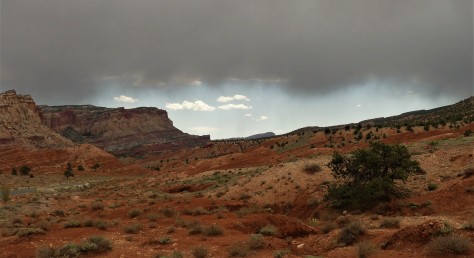 It was at that point that the weather turned against us, as looming dark clouds rolled over the mountains.  Again, the rain fell and the thunder rolled.  The last thing we wanted to do was hike on ridges or slot canyons, or be driving on a road that followed a wash when a storm was imminent.  We scooted back to Torrey without delay.

On our way back, we came up with a Plan B, which was a 65 mile drive to Escalante along Utah Scenic Byway 12.  I had previously discussed this route with our friend Jodee, who recommended it as a beautiful drive, just not in an RV.  Definitely a great road to explore in the Escape.  We grabbed a cup of java in Torrey at Castlerock Coffee, where the barista confirmed we were about to take one of America’s most scenic highways.  Off we went! 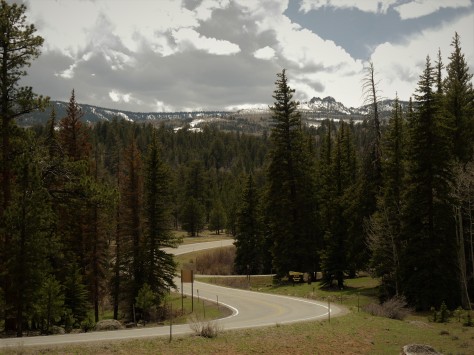 Climbing 3000 feet out of Torrey, the road was gorgeous.  We encountered rain which quickly turned to snow.  We drove on, hoping the other side of the mountain was sunny and dry… 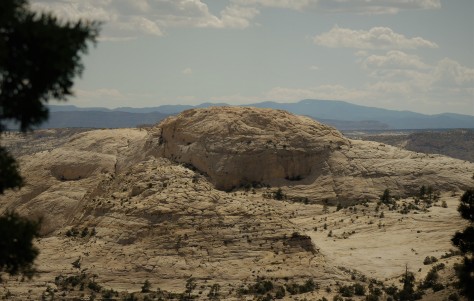 …which it was!  We were greeted with a completely different viewpoint than we had been seeing on the roads within Capitol Reef, as we were now far above the ridges.

Deep canyons were carved through the desert floor below us. 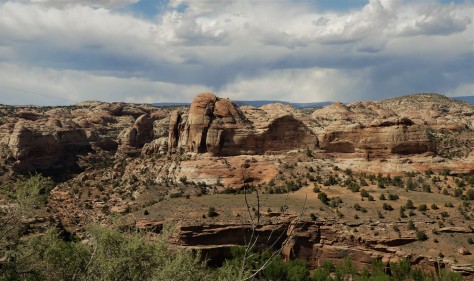 Domes of sandstone rose in the distance.  What would time and erosion turn these sentinels into over the next millennia?  Whatever they would become, the scenes would most likely be equally as grand as what we were currently witnessing. 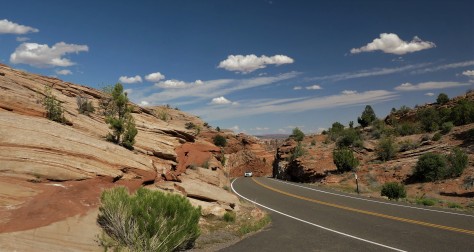 At each viewpoint, we continued to be amazed at the beauty of the landscape before our eyes.

While we did see one ‘brave’ RVer in a 40 foot motorhome towing a car on this route, sections such as this confirmed Jodee’s recommendation to leave the fifth wheel in Torrey.  🙂  One wrong move would’ve sent us tumbling a thousand feet down either side.

It was at this vista that we met a gentleman from Palm Bay, Florida, just across the Indian River from our winter home of Melbourne Beach.  He was also thrilled with what he was seeing.  When we told him that this was our Plan B for the day, he came up with the quote of the trip:  “Best Plan B ever!“  We parted ways with him and his brother, maybe catching him and his 1960 jet black Chevy at a car show next winter.  🙂

We got to Escalante, just as the visitor center at Grand Staircase-Escalante National Monument was closing.  We ran inside to a weary ranger waving her hands at us, yelling “WE ARE CLOSED!”  I told her we only needed two Junior Ranger books, as we knew we would be visiting again from the other direction when we were at Bryce Canyon.  A gentleman working alongside her gave us the books.  As we headed out the now-locked door, one of the other visitors laughed and said, “That was the nicest question they had all day…’Can we just have our Junior Ranger books?’ ”  Our apologies to the ranger…we’ve been there and we appreciate your efforts. 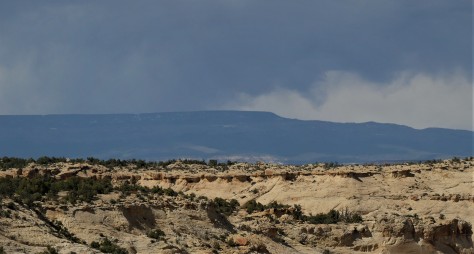 Heading back north, we could see the clouds still looming over Torrey and Capitol Reef.

Climbing to the top of the mountain pass, we took one last look across the amazing landscape before descending down the other side. 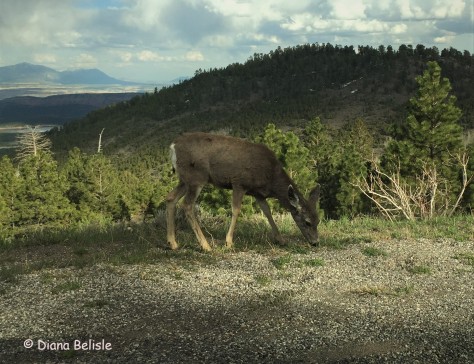 As we drove along, we passed several mule deer, who were quite comfortable with us stopping next to them along the roadway.

So while we weren’t able to explore Capitol Reef the way we wanted to, our trip along Utah Scenic Byway 12 definitely lived up to the man from Palm Bay’s description:

Next up: We head south to Bryce Canyon to meet up with a longtime friend for the very first time.  Seriously! 🙂  Stay tuned for that and more as we continue our journey around the American southwest.  Until next time, safe and happy travels to all! 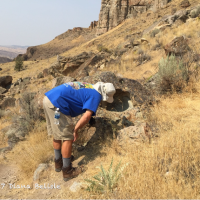 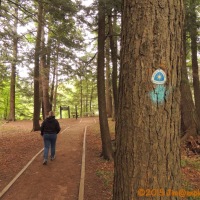