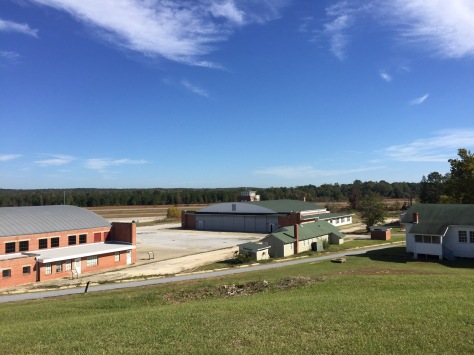 Moton Field was used for primary flight training in World War II for African-American pilots.  Located a few miles north of Tuskegee, it was part of what was deemed a politically-motivated military experiment to see if African-Americans were capable of maintaining and operating fighter planes.  President Franklin Roosevelt, the NAACP and the black press pushed the Army Air Corps in the early 1940’s to allow African-Americans to fly, as they had been barred from doing so prior to that.  Blacks were considered at that time to be lazy and intellectually unable to serve in the Air Corps, and there was actually an Army doctrine in place from the 1920’s keeping them out of the air.  Of course, those who served in the squadron worked hard to prove that doctrine wrong.

When Eleanor Roosevelt paid a visit in early 1941, she asked ‘Chief’ Anderson, the head flight instructor at the institute, if Negroes could fly airplanes.  He replied that they most certainly could, and offered the First Lady a ride, which she accepted.  As she exited the airplane after her half hour flight, she famously said “I guess Negroes can fly.”  Her visit helped solidify the programs legitimacy and move it forward. 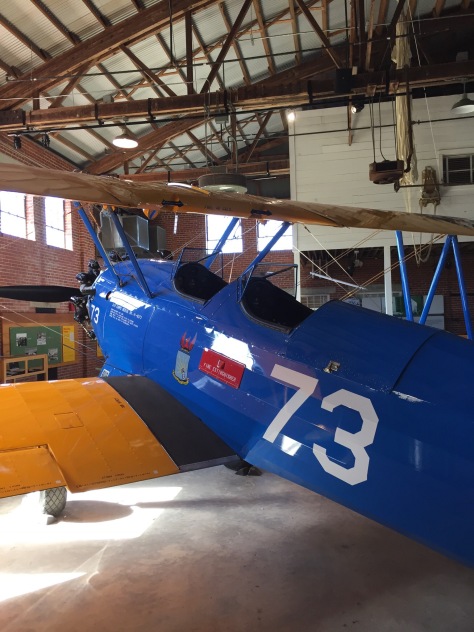 Cadets did their bookwork at neighboring Tuskegee Institute and their initial flight instruction at Moton Field.  Advanced training took place at Kennedy Airfield in Tuskegee, which no longer exists.  The plane pictured above is a BT-13 Stearman, the same type of plane my father flew at Maxwell Field in Montgomery, Alabama….barely over 40 miles to the west.

The pilots eventually flew P-51 Mustangs, considered to be one of the best planes in the U.S. arsenal.  The squadron took it upon themselves to paint the tails of their planes red to make themselves stand out.  They were proud to be flying, and they wanted other pilots to know it.  Their primary mission was to provide bomber support over Nazi Germany.  They posted a distinguished record while serving their country.

It is important to note that when we hear the name Tuskegee Airmen, the title encompasses everyone involved in the squadron…from the pilots themselves to the cooks and waitresses in the canteen.  These people fought not one, but two wars; the battle against Germany and the fight for racial equality.  Disembarking the ships that carried them home from war, they were immediately segregated into separate areas.  It would not be until 1948 that the military was desegregated by law.

Even then, it was not until 2007 that the Tuskegee Airmen received the Congressional Gold Medal, the highest civilian honor in the United States.

After visiting Moton Field, we continued on to Tuskegee University.  This school of higher learning was established in 1881 by Dr. Booker T. Washington as the Tuskegee Normal School for Colored Teachers.  It eventually became Tuskegee Institute, then later became a university.

One thing the school is known for are its’ student-constructed buildings.  Even the bricks were made by the undergraduates.  One such building is the George Washington Carver Museum.

Dr. Washington hired George Washington Carver as a professor during his tenure.  The famed botanist worked at the institute for 47 years.  During that time, he championed rotating crops of sweet potatoes, soybeans and peanuts as an alternative to growing cotton, as the latter was stripping the South’s soil of its nutrients.  Though many inventions can be credited to him, he was more interested in helping his fellow man than applying for patents.  Still, his work is highly regarded, and the museum at Tuskegee was a fitting tribute to his efforts.

Our trip to Tuskegee was an eye-opener for me, personally.  Rising from slavery to become pilots and professors, the African-American people of this community have had to overcome obstacles this white male has never had to face.  Having grown up in the racially segregated Detroit metro area, I was often confused as to why people didn’t treat each other as equals.  In today’s political climate, it seems we are going backwards from the gains made since that era.  On this Veteran’s Day in 2017, we need to remember and respect each other’s contributions to our common goal, and acknowledge when those being slighted cry out for change.  Because, at the end of the day, we all bleed the same color blood.