The Upper Peninsula of Michigan is definitely different than it’s southern counterpart.  Only 3% of the state’s population lives up here.  They actually have their own state fair, as they are so far removed from Detroit. The weather in the U.P. Is sometimes referred to as 9 months of winter, followed by 3 months of bad sledding. Ontonagon averages 200 inches of snow each year!

After spending the night at the KOA in St. Ignace, we set our course west for the Porcupine Mountains.  The Porkies, as they are affectionately called, have been a draw for Diana and I for years.  We both were there as teenagers, and were there together one time during the 1990’s.

We left the KOA in a thunderstorm, which was the first rain we had seen in quite awhile.  Behind us, a little drama was unfolding on the Mackinac Bridge. 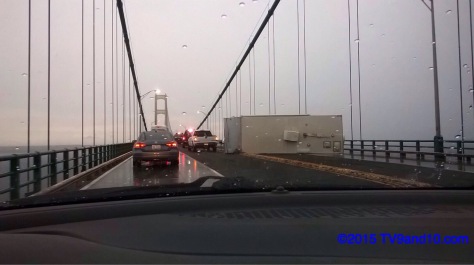 A wind gust had blown this RV onto it’s side, closing the bridge.  There is a very good reason they want high profile vehicles to go 20 miles an hour!

As we made our way west on US 2, our weather cleared up.  We stopped at the Cut River bridge, a favorite place to explore.

Michigan’s Department of Transportation maintains parks on both sides of the bridge.  From the roadway, the beauty of the structure and the gorge below can’t be seen.  It is definitely worth stopping to take a look.

Here is Diana checking out the superstructure under the roadway.

This doorway was immediately behind her. We found the nameplate on it to be amusing. 🙂

On our way west along U.S. 2, we were able to look south over the northern shore of Lake Michigan.  What we saw in the distance was disturbing.  The sky was as black as night, and the radar on our iPhones was indicating that a major storm was headed straight for the Leelanau Peninsula, about 100 miles south of us.  All of our friends at Wild Cherry were in for some nasty weather.  It wasn’t long, and the photos started rolling in on Facebook:

This is what they saw coming at them at Sleeping Bear. Glen Arbor and the national lakeshore took the brunt of it.

Latest reports indicate that Glen Arbor sustained straight line winds of over 90 miles an hour!  M-22 coming in from the south is still impassable, 2 days later.  Fortunately, no one was killed.  Wild Cherry never lost power, and just had a few branches down.  The photo above is on what was a heavily forested stretch coming into Glen Arbor along Glen Lake.  It was a gorgeous drive.  So sad…..

Back to our trip:  We continued west to Marquette for the night.  Going on a tip from Cherie and Chris at Technomadia about casino camping, we stopped at Ojibwa Casino, east of Marquette.  The casino actually paid us to camp there!

They gave us each $15 in free slot play, a free mixed drink (or beer), and $10 in match play for blackjack.  We passed on the blackjack, and we came away with almost $10 total from the slots. 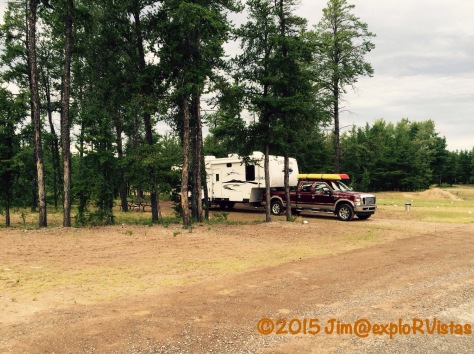 Oh, and this wooded campsite was free!  It even included 50 amp electric!  For anyone thinking about staying here, make sure you come with a full fresh water tank and empty holding tanks.  They don’t have a dump station or water available.  We ended up dumping farther west on Monday at Van Riper State Park, which was free with our Michigan Recreation Passport.  Thanks to the Ojibwa nation for the hospitality!

Our next stop was River Road RV Park in Ontonagon, Michigan, which is the eastern gateway to the Porcupine Mountains.  We set up camp for a few days of fun in the area.  We were given a nice full hookup site, just a few yards away from the Ontonagon River.

Late Monday afternoon, we headed up to the visitor center at Porcupine Mountains Wilderness State Park.  We discovered that the state park was established in 1945 in response to the U.S. National Park Sevice contemplating making it a national park.  Michigan wanted it for their own.  Diana first came here with her family in the early 1970’s and I came with a buddy in 1975 at 17 years old, just after getting my driver’s license.

After we left the visitors center, we headed up to Lake of the Clouds. 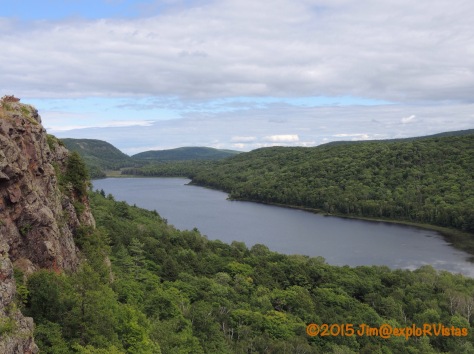 The lake is accessible by foot trail only, and is totally surrounded by wilderness.  There are no boats to be seen on this beautiful body of water. The surrounding hardwood forest in the park is the largest stand of virgin, old growth hardwoods west of the Adirondack Mountains.  The fall colors here are outstanding in late September. 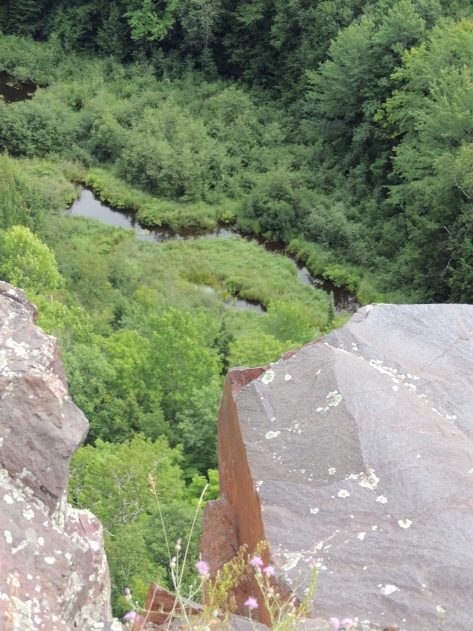 The viewing area is on an escarpment high above and adjacent to the creek that feeds the west end of the lake.

This gentleman was playing a Native American flute on the boardwalk at the edge of the cliff. 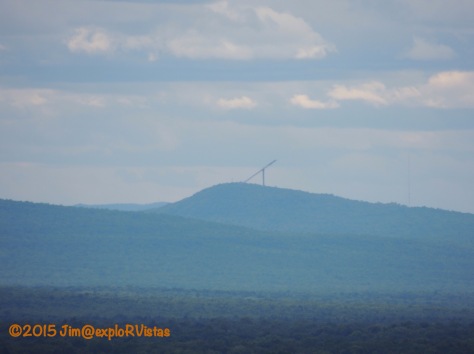 To the west, I was able to zoom in on the Copper Peak Ski Flying Hill about 30 miles away.  It is the only ski flying hill in the Western Hemisphere.  Ski flying covers greater distances than normal ski jumping.  Anyone care to try it?  🙂

Zooming back out shows just how vast this wilderness is.

We have more of the park to explore, and we look forward to passing along our discoveries.  The Upper Peninsula is definitely a unique place to visit!

27 thoughts on “West Across the Upper Peninsula ”