The Christmas season is usually the time most full time RVers really notice that they are away from the area that they had been rooted in most of their lives. This first year as full timers, even though we sold our ‘sticks and bricks’ house, we are fortunate to still be in the same general region we had been planted in during our careers. Not that we wouldn’t mind seeing decorated palm trees in Florida…

Just north of Grand Rapids is the small town of Rockford, Michigan. We drove up there this week to wrap ourselves in a little holiday spirit. Rockford is a city that is being enveloped into the outer reaches of the Grand Rapids metropolitan area, yet its’ downtown retains the small town charm of years long past. Coming into town, a banner over the road proclaims “Welcome Home For The Holidays”, and Rockford really lives up to that statement. 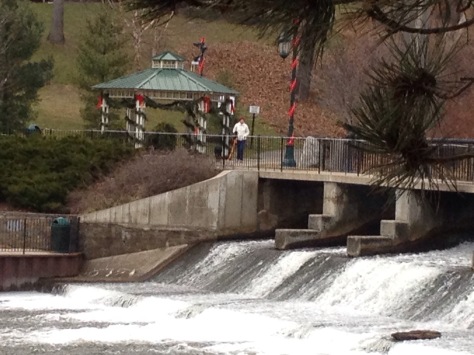 The town was originally named Laphamville in the 1840’s after Smith Lapham, who helped construct the first sawmill dam on the Rogue River at that spot. When the Grand Rapids and Indiana Railroad came through in the 1850’s, they proposed a shorter name. A former resident of Rockford, Illinois spoke up and proposed they name the town after his former home, citing the ‘rocky ford’ below the dam. And just like that, Rockford, Michigan came to be.

Rockford is known as being the headquarters for Wolverine Worldwide, better known for its’ primary brand, Hush Puppies. While the manufacturing facilities have left town, the corporate offices are still here.

One of the local favorite hangouts is the Corner Bar. This little gem was built in 1873. When Prohibition was repealed, a requirement to obtaining a liquor license was that the establishment serve food. First item on the menu was a chili dog. Over time, folks would see how many dogs they could eat in one sitting, and the Hot Dog Hall of Fame was established. A four hour time limit was set, and the rest is history. In 1982, Sharon Scholten downed 42-1/2 dogs in the time allotted. That record stood until 2005 when Belinda Gould made three attempts on three consecutive Fridays, the last being a success. It hurts just thinking about it…

The streets are lined with unique shops. One place we had never visited was Old World Olive Company. We knew that one of our fellow RV-Dreamers had owned a similar shop in California, so we stopped in to check it out.

While the olive oils were good, it was the balsamic vinegars that knocked our socks off. We purchased a Vermont Maple vinegar and a Mandarin Orange vinegar. That was a nice little gift to ourselves to use in our RV.

One of the other stores in town had a rack full of red flannel underwear. The next town north of Rockford is Cedar Springs, better known for its history of making these crimson garments. The Red Flannel Festival is held there every year. They really do paint the town red!

As mentioned earlier, the Grand Rapids and Indiana Railroad once ran through Rockford. At its height, the railroad ran from Cincinnati, Ohio to Mackinaw City, Michigan. While most of that railroad ceased to exist, a good portion of the rail bed has been turned into various bike trails. The longest of these, the Fred Meijer White Pine Trail Linear State Park, runs 90 miles from Grand Rapids north to Cadillac, Michigan. It runs directly through the heart of Rockford. Many of the folks who live in Rockford and work in Grand Rapids use the trail in the summer to commute to and from their jobs. Most of the trail is asphalt, with some of the northern sections being crushed gravel.

For dinner, instead of hot dogs, we opted for Grill One Eleven. This has been a favorite of ours for a few years now. Diana opted for the walleye. She has had their Reuben in the past, which she loves.

I chose the gluten-free version of the Rogue River Rockafeller, which was basically a steak with scalloped potatoes and vegetables. But, as you can see, that description did not do it justice. It was outstanding.

By the time we left the restaurant, the sun had set. On our way back to our vehicle, we were treated to a dazzling display of Christmas lights in the trees. It was a nice ending to an enjoyable afternoon, and a good break from caregiving for Diana.

So, wherever this season may find you…be it in familiar surroundings or in faraway places, remember that ‘home’ is in your heart. Diana and I have this plaque next to our door that sums it up for us: 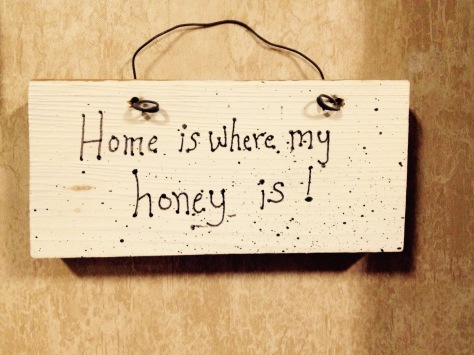 Happy Holidays to all, if we don’t post before then!

14 thoughts on “A Small Town Christmas”