When we chose to return to Sleeping Bear Dunes National Lakeshore this summer, we were hoping to build upon what we learned in 2018.  That has indeed happened, making this a very different season than we experienced last year.  And even though the subject matter was pretty much the same at our venues, the constant flow of new visitors has made each day unique and special.

When we first arrived, Ranger Matt asked if we would learn a new skill and work it into our interpretation; rope splicing and binding.  Many of the ropes in our museums were becoming frayed and worn and needed replacing.  Also, since our structures were built at the beginning of the 20th century and are not entirely critter-proof, mice find their way in during the winter.  Evidently, Mickey and Minnie have a thing for hemp.  🙂  I was given 200 feet of synthetic rope to replace the old lines with.  Larry, a volunteer with Inland Seas Education Association in Suttons Bay, stopped by to teach me how to backsplice a rope into an eye splice, along with making a sailmakers whip to keep the rope ends from fraying.

This is my first attempt at a sailmaker’s whip on a practice piece of hemp rope. 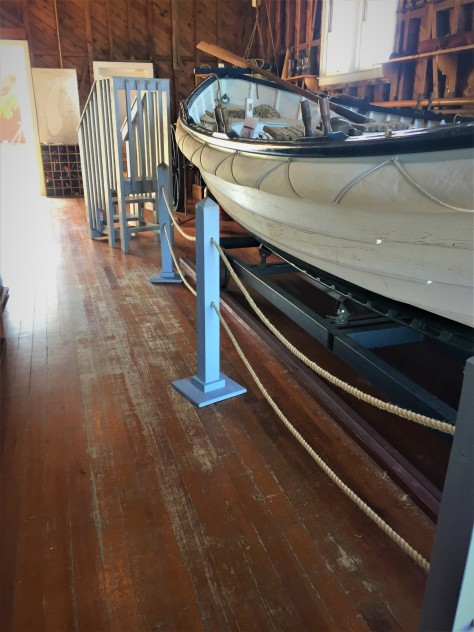 The lines are intended to act as a non-intrusive barrier between the visitors and the artifacts.

The new line is much thicker than the old.  I found it difficult to maintain the structure of each strand, due to the slippery nature of the synthetic line.  Still, I was pretty happy with the way it ended up.  Note the hooks, which are made in our blacksmith shop.

I needed some additional hooks and spikes for the Cannery, so Linda and Liz made them for me.  They are two of our volunteer blacksmiths, and they did an outstanding job! 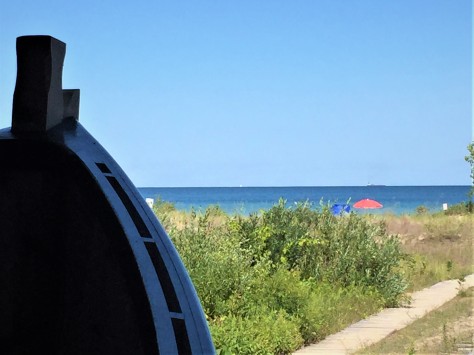 While I worked on the rope, the view from our ‘office’ was amazing!  Off on the horizon, the 1,000 foot freighter Mesabi Miner steams empty from delivering a load of iron ore to the steel mills near Chicago.

Some days reminded us of the reason the lifesaving station was located where it was.  Here is Old Glory flying straight south on our radio tower/flagpole, with gloomy skies looming overhead.  Could the gales of November be far away?

That earlier peaceful view can change in an instant.  In this photo, the 767 foot long freighter Philip R. Clarke heads north along the horizon through heavy seas.  Seas like this brings a crystal clear reality to our interpretation of the U.S. Lifesaving Service, as the visitors get a glimpse of what the surfmen were up against.  Most shake their heads in disbelief that they would row out into those conditions.

The park’s Heroes of the Storm program helps folks to visualize a beach rescue using a Lyle gun and a breeches buoy.  Here is Ranger Gayle explaining the role of the 7 surfmen who worked at the station. 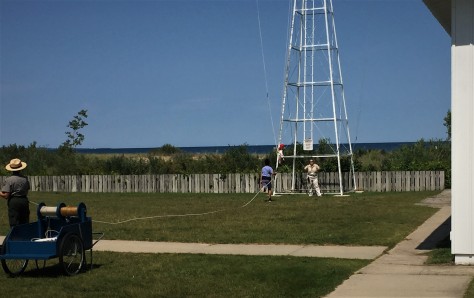 One of the surfmen acts as the black powder charge in the gun, as the crowd yells BANG.  Here he runs at full speed with the projectile, trailing the shot line.  Captain Diana waits with crew member Raggedy Ann aboard the ‘sinking ship’ (our flagpole) for the line to arrive.  Every program has a fresh set of characters, and is as entertaining for us as it is for them. 🙂  Sadly, this year’s high water levels brought about a temporary halt to our actual Lyle gun cannon firing each Thursday.

The beach has all but disappeared.  The small cannon recoils backwards a few feet when fired, and the required distance for safe viewing would put our visitors in the fragile dune grass.  Lake Michigan has risen 9 inches in May alone and is 33 inches above average at near record levels.  To get Lake Michigan and Lake Huron (hydrologically one lake) to rise just one inch, an additional 390 billion gallons has to be added to it!

Another foot and we might be mopping the floors in the Cannery!

It hasn’t been all work up here in Leelanau.  We did manage to get out for a ride on the Leelanau Trail, our favorite rail trail.

It’s hard to see Diana’s TerraTrike grin from behind, but it is there.  🙂

And the Music in the Park concert series continues for a few more weeks in Northport.  Plenty of dancing and wine make for a great evening each Friday.

Indeed, Leelanau is a great place to be.  A few more weeks and this season will be a memory.  Soon we will be coming to you from new vistas in the United Kingdom and Ireland.  Will we be back to Leelanau next year?  If we do, we are sure it will yet again be different than years past. Be sure to stay tuned to our next Saturday morning post to see if 2020’s plans include this little slice of heaven.  Until then, safe and happy travels to all!