It was the summer of 1982.  Diana and I were newly married, I graduated from college and we headed off to Austin, Texas for a metal shop teaching job I was hired for.  Work was scarce in Michigan in those days.  The job didn’t pan out and we returned to the Midwest, but we always hoped to return to Austin for a visit someday.  Diana’s cousin Nancy and her husband David lived there (and still do), so we had a good reason to come back.  Who knew it was going to take 34 years?

In 1982, Austin was just starting to see some of the growth that has since exploded in Travis County.  Nice houses were starting to pop up in the hills west of town, but the entire place was still pretty laid back.  We rented a little two bedroom house on the north side of the city.

The house is still there!  Not sure why the lawn isn’t mowed, as the house itself appears to be in good shape.  The ‘north side of town’ has turned into the middle of town, as Austin has expanded so much.  I checked the price estimate online and it is appraised at $285,000!  My, how things have changed.

Nancy and David had us over for dinner to their place the day we got there.  Their son Robert and daughter-in-law Tasia brought their children for us to meet.  Also, Nancy’s nephew Ben (Diana’s second cousin) and his wife Sara came over with their new baby boy.

It sure was great to see everyone!

Diana and I both got our chance to snuggle with the little guy!

During the few months we lived in Austin, there were a few unique places we had checked out that we wanted to see again. One was the Capitol building.

This beautiful pink granite edifice was designed by Elijah E. Myers, who also designed the Michigan and Colorado State Capitols.  If you zero in on the statue at the top, you will see that she is holding a lone star.

Inside the rotunda, there’s that Lone Star again, up there in the dome!

Another place we visited back in the day was Hippie Hollow.  Diana had asked at her job for places to check out.  So we drove out to this place on Lake Travis…out in the middle of nowhere… and found a gravel pull off that several people were picnicking at.  Diana was trying to figure out how we were going to swim there as you had to climb down a cliff to get to the water when she exclaimed, “That girl doesn’t have a top on!”  I said, “Honey, you are the only girl here with a top on!”  Well, we weren’t into nude sunbathing, so we left.  Fast forward to this year, and we were driving down a very busy road in the hills.  All of a sudden, we see one of the brown highway signs that indicates a county park…saying Hippie Hollow!

Lo and behold, it is now a county park.  I like the little “no bikini” symbol on the sign.  :). No one will ever accuse Austin of not being progressive.

Next up was another place Diana had found out about from coworkers…the Dry Creek Cafe and Boat Dock.  Again, this place was way out in the sticks. Back then, it was owned by none other than Sarah Ransom, affectionately known as the meanest bartender in Austin.

Cigarette hanging out of her mouth with a one inch ash drooping off the end, she served up longnecks and nothing else.  There was no cafe, nor was there a boat dock.  There was two levels to the place, with a jukebox serving up Willie, Waylon, and Merle. The draw was the sunset over Lake Austin that could be seen from the upper back deck.  The cars in the lot ranged from pickups to BMW’s.  None of that mattered to Sarah, as she would bark at you “ya take ’em up, ya bring ’em back down”, referring to the beers she was serving you.  And if you didn’t bring it back down, you weren’t getting another beer until you went back up and retrieved your empty.

Well, Sarah passed in 2006, after more than 50 years of owning Dry Creek.  Giant mansions started to spring up around the place, but her son has hung onto it. 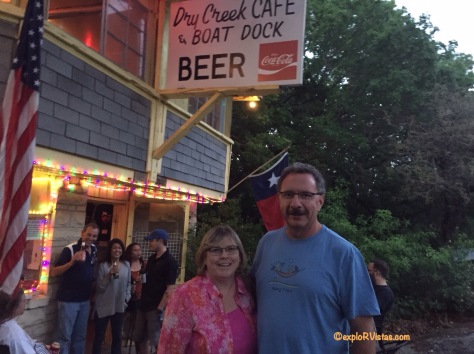 We pulled in and it was like a time warp.  Luckenbach, Texas was coming out of the jukebox, the longnecks were cold, and the cases for the empties were open and ready for us to bring ’em back down. 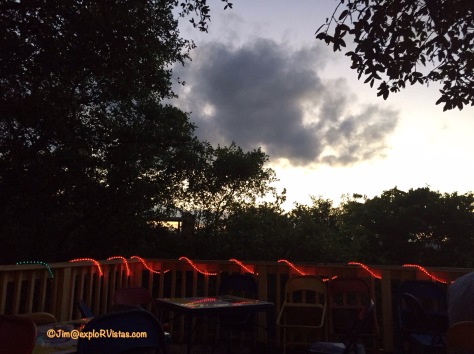 The trees have grown up behind the deck, so the sunsets aren’t quite as visible…

…but the company was as great as the last time I was here.  🙂   As we pondered as to how different our lives would have been if we’d stayed in Austin, we both agreed that we’ve done ok for ourselves, finished our drinks and brought ’em back down.

Sarah would be pleased.  🙂

17 thoughts on “Return to Austin” 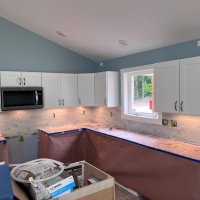