NOTICE: November 2017:  Shark Valley is currently closed, due to high water from Hurricane Irma.  To see a current status, check this link.

Before we came to South Florida, we had the preconceived notion that Everglades National Park was a hot, mosquito infested swamp…somewhere that we would find difficult to visit.  Well, we were pleasantly surprised this last Friday when we visited Shark Valley, the northern portion of Everglades National Park.  As luck would have it, a cold front had swept through the area on Thursday and brought the region low humidity and temperatures in the high 60’s. Insects were few and far between. Perfect weather to go for a 14.7 mile bike ride into the heart of the glades!

The name ‘Shark Valley’ is somewhat deceiving.  There are no sharks in the freshwater of the Everglades; the name comes from the Shark River Slough, the large body of slow moving water coming down out of Lake Okeechobee.  The valley is all of 10 feet deeper than the Atlantic and Gulf ridges to the east and west.  The Everglades are not swampland, but rather a shallow river of clear, fresh water flowing over a limestone base from north to south.  While they were once much larger…extensive portions were drained and developed…they still are massive.  They are also quite diverse in their fauna, ranging from sawgrass to tall pine trees.  Surprisingly, there were very few palm trees.

The National Park Service operates a tram along the Shark Valley Tram Trail….a 15 mile asphalt loop road that runs south from US-41 into the middle of the park.  They also rent bicycles and allow walkers on the trail.  We decided to take advantage of the great weather and check it out with our TerraTrikes!  It is advised to arrive early, as we got there just after noon and were subject to a half hour ‘one car in/one car out’ wait. 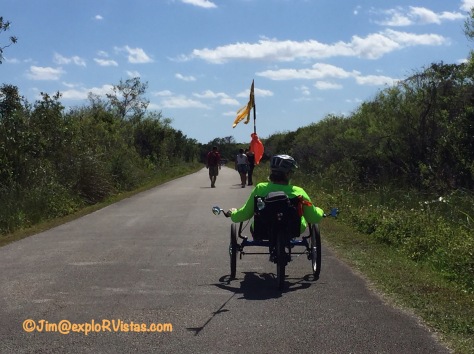 Diana took the lead and kept an eye out for alligators.  It’s one thing to be standing up and looking down at them, but we were a lot closer to their level with our recumbents!

It wasn’t long before we saw the first one.  A ranger told us to never pass between their head and the water, as that is their escape.  He didn’t need to tell us twice.  🙂

We quickly started seeing other wildlife, such as this Great Blue Heron.  What appears to be grasslands from ground level is actually mostly water, which can be easily seen from the air.

We spotted this tortoise along the side of the trail.

Yet another gator laying in the grass.  At one point, I stopped to view a turtle, so Diana stopped and began pushing her trike back with her feet.  Her gears made a clicking sound that evidently scared a gator that was hiding in some tall grass, just out of our view.  It jumped into the water with a huge splash. That really got our heart rates going!

Diana spotted this colorful Bull thistle.  We saw several wildflowers in bloom throughout the trip.

Near the southern end of the trail, an observation tower rises above the Everglades. 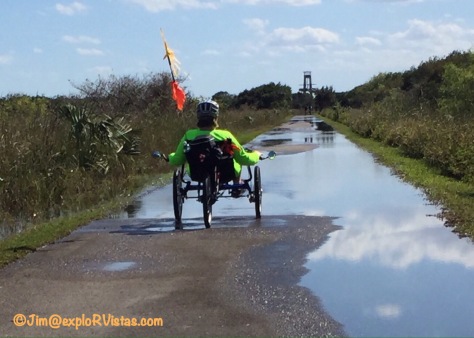 As we approached, we had to go through a fair amount of water over the path.  This runoff was actually flowing across the road, as this part of Florida has had a lot of rain this year.

While parking the trikes, we noticed this big alligator sizing up all of the tourists.  :). Actually, only one person has been attacked by a gator in Shark Valley since it opened in the 1940’s…a young Brazilian boy who fell off his bike into the canal near the visitor’s center.  His mother jumped in and rescued him by prying the reptile’s mouth open.  While that was an unfortunate accident, we are continually amazed at how some people tempt fate by posing with creatures like this.

As we started up the tower, we noticed this American Crocodile.  Notice the narrower snout.  Alligators have a much wider spread between their nostrils. The Florida Everglades are the only place in the world where crocodiles and alligators co-exist in the same habitat.  We were lucky to see this one, as they are endangered and it is rare to see them in the wild.

Here I am near the base of the tower. 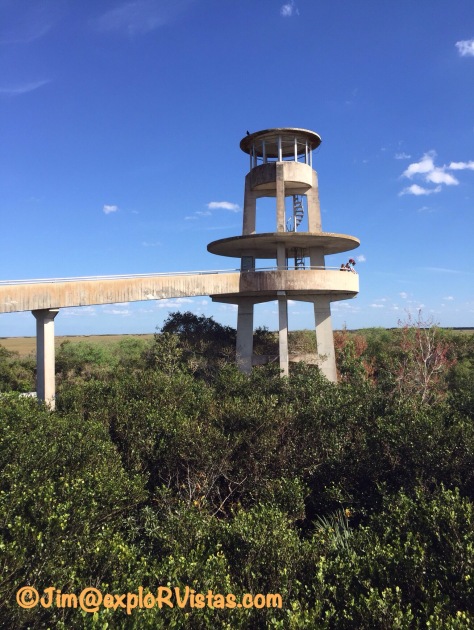 The concrete structure rises above the valley and gives a great view of the surrounding landscape.  The upper portion is closed off, most likely for safety reasons.

Looking back north, you are able to see the road we had just biked on. 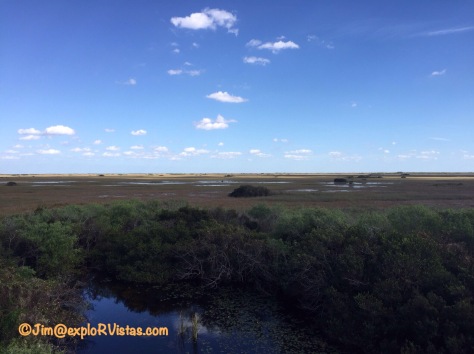 To the east, south and west, there is wilderness as far as the eye can see!  While most national parks showcase stunning geographical features, Everglades National Park was the first to be established to protect and display the vast ecosystem. It is the third largest park in the Lower 48, behind Yellowstone and Death Valley.

After we were done at the tower, we returned on the curvier eastern side of the loop road.

It wasn’t too long before this Great White Egret flew in front of us.

We passed this partially submerged gator. 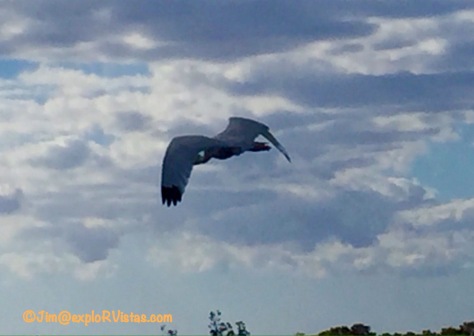 Here is a White Ibis in flight.

We also saw plenty of hammocks, which appeared to be islands in the glades.  What we found out was that they are actually deeper water than the surrounding landscape.  When the Everglades dry up in the hot summer, these deeper areas are able to support tree growth.  A change of mere inches can cut short the life of a tree, as has happened to the trees in the foreground.

As we neared the end of the trail, this Anhinga stood by the side of the road, drying its wings.  He didn’t move at all as we slowly passed by.

If you ever get a chance to visit Shark Valley, be sure to do so.  It’s a great way to spend a day!

Shop Amazon through exploRVistas by clicking this link.
explorRVistas is a participant in the Amazon Services LLC Associates Program, an affiliate advertising program designed to provide a means for sites to earn advertising fees by advertising and linking to Amazon .com. Shopping here doesn’t add anything to your cost, but it does help support this blog. Thank you for considering shopping through exploRVistas!