“Did you ever see a place that looks like it was built just to enjoy? Well, this whole state of Maine looks that way to me.”
Will Rogers

Every three years, from 1986 through 2010, we would make our pilgrimage from Michigan to Maine. (We missed 2013, as we needed to stay closer to Diana’s mom.). Just driving across the border into Maine from either New Hampshire or Quebec, we felt as if we were ‘home’. Our ultimate destination was Acadia National Park. From the first time we set foot in Acadia, there was something about the place that spoke to us. 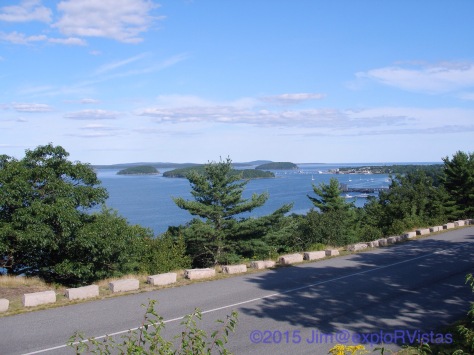 It is at this geographical point that the Appalachian Mountains meet the sea. Acadia is located mostly on Mount Desert Island (pronounced ‘dessert’, as the French explorers noted that the tops of the mountains were deserted…or devoid of trees). In national park terms, Acadia is rather small. It is also known to be one of the most heavily used parks in the system.

With that being said, we have never failed to find solitude here when we have sought it. Acadia is also unique in that they allow dogs on the hiking trails. Our favorite hike has always been the summit of South Bubble Mountain, which overlooks Jordan Pond and the Atlantic Ocean beyond. 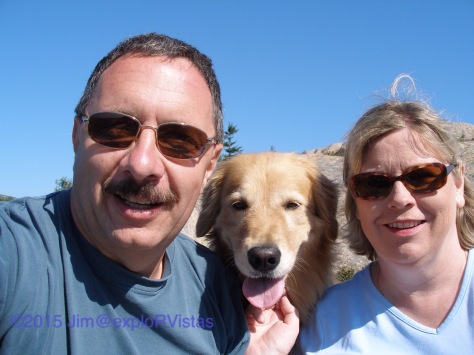 Here we are with Jenny in 2010 at the summit. This is a hike that can be done with all ages and a good set of athletic shoes. Our friend’s four year old, Billy, did it with no trouble at all.

Jenny absolutely loved it up there, as did our two previous Golden Retrievers, Katie and Dakota. (Katie’s full AKC name was Belisle’s Acadian Sunset, a testament to the love we have for this place). Maine is chock full of wild blueberries in early August, and Katie was an expert at picking them off the bushes on South Bubble. Dakota, on the other hand, would try to devour the entire bush and would end up spitting the whole thing out. :). Our advice for this hike: get there early, and you won’t see another soul for hours.

Another story I am compelled to share occurred in July, 2004. We had just lost both Katie and Dakota to cancer in May and June. Before we got Jenny, we made the trip to Acadia dogless. As we were coming out of Trenton on Route 3, there above the island was a beautiful double rainbow. Yes, indeed…this place speaks to us.

Acadia boasts of having the highest point on the eastern seaboard; Cadillac Mountain. While it is only 1530 feet high, that is from sea level…and the sea is within view.

The summit of Cadillac is the first place in the continental US that sees the sunrise each day. Every morning, weather permitting, people make the trek to the top for the spectacle. With Acadia being on the extreme eastern edge of the Eastern time zone, it requires getting up really early! We did it one time with Kate and Dakota. Our preference has always been the sunsets from up there.

A great spot to watch the sunset is the Blue Hill Overlook. It is there that we learned (from a Kodak representative who was set up there) the trick to stick around for a half hour after the sun actually sets, as the clouds erupt with color and provide a spectacular show. It only works if there are some high clouds. Next time you watch a sunset with a crowd, watch everyone leave when Old Sol disappears. Stay put with the few who know this secret. You won’t be disappointed.

MDI is dotted with several lakes and ponds.

This photo is of Bubble Pond. While it looks small, it is deceptively long, and it is crystal clear. While there are usually quite a few people present on the northern shore of this pond, it is rare to find anyone with their kayaks on it. We took the time to get our boats off the truck and paddle it one time, and we were not disappointed. Our favorite paddle is Jordan Pond. Even though this body of water is surrounded by a well used trail, there is a certain sense of solitude once you pull away from the shore. It is on Jordan Pond that our kayaks got their names, Ketchup and Mustard. (Ask us around a campfire about that). Just a note to anyone wanting to paddle the ponds on MDI: these waters are public water supplies, and body contact is against the law. There are local water officers that are authorized to write tickets. We wear wetsuit boots to get in and out of our boats, and we have been personally thanked by the officers for doing so.

As you can see, his cruises have become quite popular.

He employs a young crew who spend their summers in the area, and he enlists the help of passengers to help raise the sails. These trips are always a great way to spend an afternoon or evening. 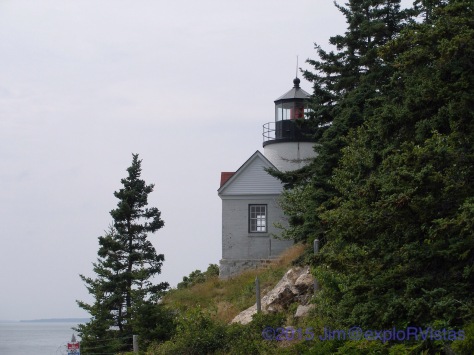 A favorite destination is Bass Harbor Head Lighthouse. While it is not open for visitors, it is a great spot for photographs.

Most of the visitors to Acadia limit themselves to the Park Loop Road….but Acadia is so much more than that. The park has hundreds of nooks and crannies to be explored, some of which you will find complete solitude. Most of the trails are easy hikes, even up the mountains. Some are strenuous, and some are even technical. A visitor can go from complete serenity to the nightlife of Bar Harbor within minutes. It is possible to go from seeing a lobster boat in a fishing harbor to seeing the Queen Mary II in Frenchman Bay. A cyclist can navigate their mountain bike on the fifty miles of carriage paths left by John D. Rockefeller (no cars), and sunbathers can spend the day at Sand Beach. A visitor can climb on the rocks with the crowds at Thunder Hole, or explore the quiet side of the island with no one else around. For our 25th wedding anniversary, we chose to celebrate by hiking to the top of Penobscot Mountain. 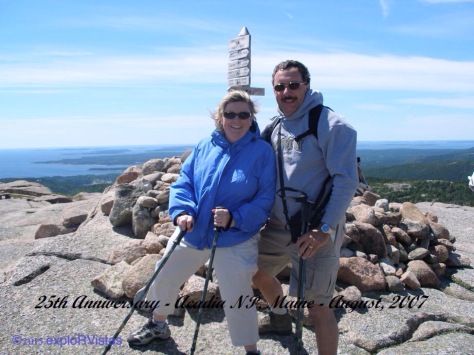 I couldn’t think of a place I would rather be than up there with my sweetheart. 🙂 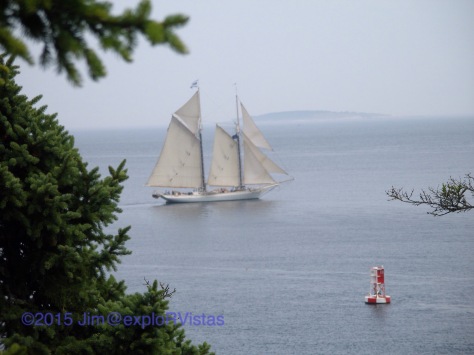 As you can see, Maine and Acadia have become second homes to us. We could write volumes about our experiences there. Even with our numerous two week trips to that slice of heaven, we have only scratched the surface of the many things to do there. We have caravanned with our friends Karen and Bill and their children Nina, Christine and Billy twice, and with Mike and Cindy and their boys Brian and Eric once. They loved every minute of it. Diana and I chuckle when we meet people who tell us that they spent the day there and ‘saw everything there was to see’. We have yet to become bored with Acadia, and we discover another layer each time we go. We have to agree with Will Rogers, as Maine has been, and will continue to be, pure enjoyment for us.