A number of years ago, we visited the Rock and Roll Hall of Fame in Cleveland, Ohio.  As we walked into the lobby, my country music-loving sweetheart heard the guest artist Jamie O’Neal performing her country hit There is no Arizona.  Diana was giddy, to say the least, to hear a country artist performing in the shrine to artists like Lennon, Dylan, the Rolling Stones and so on.  As we waited in line for tickets to the museum, the lyrics and melody filled the atrium:

There is no Arizona

No Painted Desert, no Sedona…

Well, after what we’ve seen over the course of this last week, we beg to differ, Jamie. 🙂

From the moment we arrived in Springerville, Arizona for a one night stopover, we knew it was going to be a great week.  Looking back east from a fairly nice sunset revealed this surreal moon rise.

We continued on to Petrified Forest National Park where we spent a few nights.  We scored a nice campsite at the Crystal Forest Museum just south of the park that gave us 30 amp electric for only $10 a night. 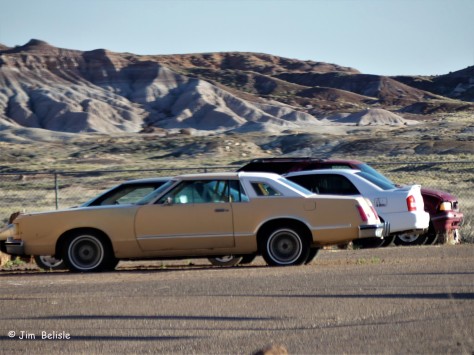 At first glance, the old cars with the flat tires in the parking lot gave us pause.  We found out they parked them there a long time ago to make the place look busy.  I guess its time to either update the cars or at least air up the tires.  🙂

Petrified Forest was outstanding.  The southern end of the park was filled with logs that had been turned to stone after being buried for millions of years.

This particular one was huge!  There is a photo in the visitor center with Albert Einstein and his wife standing next to it. 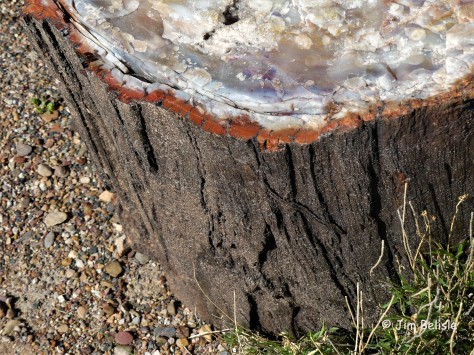 Although the outside of the tree looks like bark, that is actually stone.

Halfway through the park, we came to Blue Mesa.  Taking the trail, we hiked down into an area that appeared very much like the painted hills we saw in Oregon a few years ago.  Not quite blue, but very interesting to look at!

At the north end of the park is the Painted Desert Inn.  This is a restored Civilian Conservation Corps era building that is very interesting to tour.

Behind it is…you guessed it…the Painted Desert!  Guess Jamie O’Neal was wrong about that one!  Wow…it was absolutely beautiful.  It seemed like it went on forever.

From Petrified Forest, we moved on to Meteor Crater.

This giant hole in the ground was caused by a 150 foot long meteorite that hit here 50,000 years ago.  It was estimated to have been travelling at 26,000 miles an hour.  Pretty impressive, to say the least.  Equally as impressive was the interactive visitor center.  This entire facility is privately owned, and kudos to the owners for offering a prime visitor experience.

While at the adjoining Meteor Crater RV Park, we drove back into Winslow to visit one of Rock and Roll’s other shrines…

…the corner, from the Eagle’s song Take it Easy.

Its my girl, my lord, by a flatbed Ford, taking a good long look at me!

We also checked out the La Posada Hotel.  We had a fabulous lunch in the hotel’s Turquoise Room.

The lobby was pretty, but the ‘death art’ on the walls was a bit much.  Turns out the hotel owner is the artist.

I did my best to plunk out Hotel California….

From there, we moved west to Flagstaff for a few days.  The town got its name when some men stripped the branches and bark from a Ponderosa pine tree in 1876 and flew an American flag from it.

We visited two parks in the area while we were there.  The first was Sunset Crater National Monument.  This cinder cone is part of a chain of volcanic features that dot the area.

This feature was called a squeeze up, which occurred when the molten rock was squeezed out of the earth like Play Dough.  As it cooled, it sagged under its own weight. 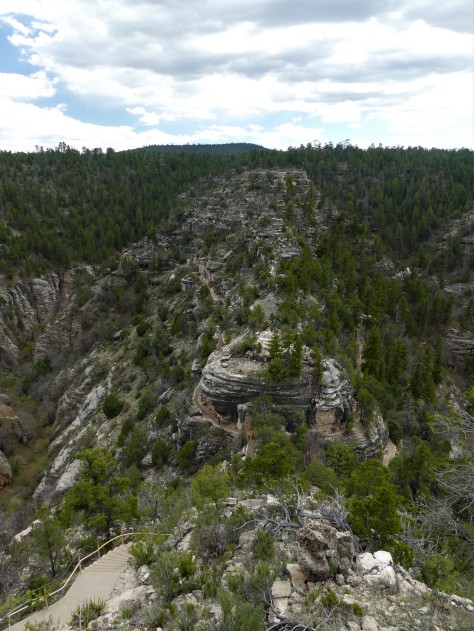 We also visited Walnut Canyon National Monument.  This park features a trail, seen above, that descends into the canyon.

Once down there, the path winds past several ancient cliff dwellings.  It was interesting to see the protection the overhanging rock offered.

From the rim, there was a nice view of Humphrey’s Peak and it’s neighbors.  Humphrey’s is the tallest peak in Arizona.

On our final full day in Flagstaff, we headed south to meet fellow blogger Ingrid from Live Laugh RV. We have followed her blog since 2014.  She has a similar camera to mine, and she offered to drive up from Phoenix to meet us and give me a few camera tips.  We met in… 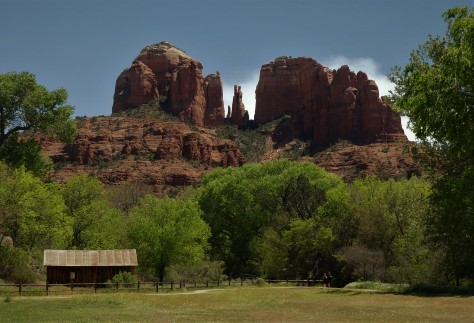 Here we were taking photos of the cairns near Budda Beach. 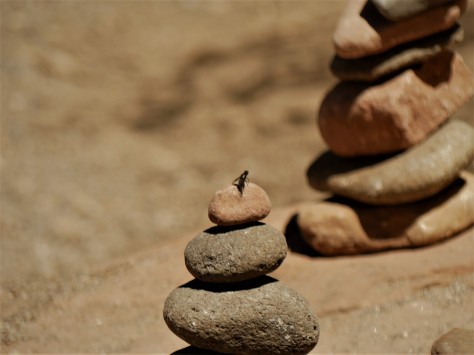 I managed to focus on this fly sunning itself on top of one of the cairns. 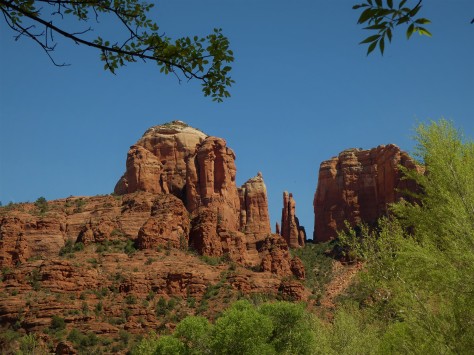 I learned a lot about my new camera, thanks to Ingrid.  Hopefully that translates to better photos in the future!  It sure was a pleasure to finally get to meet her in person.  🙂

And Sedona?  It was beyond words.  We were amazed at every bend in the road.  We are happy to report that there IS a Sedona, a Painted Desert and most importantly, an Arizona.  All are beautiful and a pleasure to explore.

Next up:  The Grand Canyon South Rim!  Until then, safe and happy travels to all! 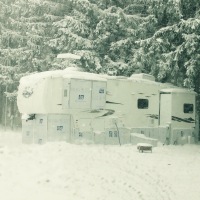 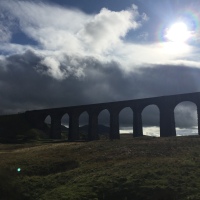 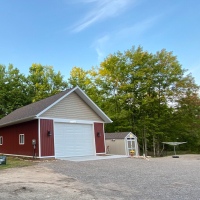