In our last post, I mentioned relearning how to drive in the U.S. after spending a month in the U.K. and Ireland. Our delayed flight got us back after dark, so we had to navigate the aggressive freeways of Chicago in an unfamiliar rental car. Talk about wanting to get back on the plane! Once past Gary and into Michigan, the traffic eased and we were able to relax. Jet lag caught up to us soon after, so we grabbed a comfy room at the Hampton Inn in South Haven. After a delicious breakfast at the Phoenix Street Cafe the next morning, we headed back to Grand Rapids to get our vehicles. A huge thank you to Terry and Diane for allowing us to store them at their home! 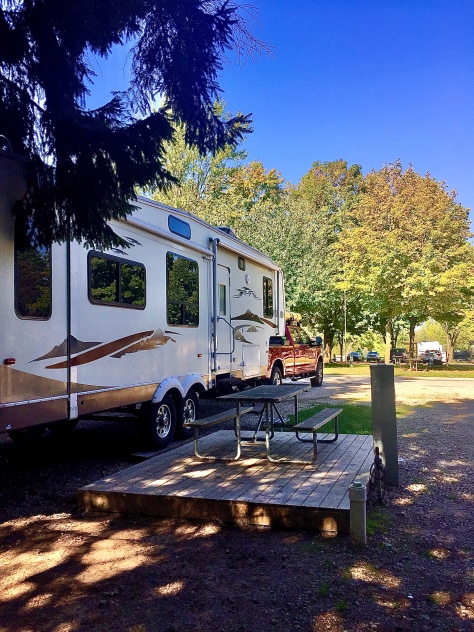 We moved to our base for the next week, Woodchip Campground. Our spot was just a few sites east of where we spent the winter of 2014-15. This go around, we spent the week taking care of annual physicals, dentist appointments, haircuts and such. We even bopped over to Detroit for one appointment at Henry Ford Hospital. That gave us the opportunity to drop in on Diana’s cousin Debbie on our way home. It was great to see her again. We finished up the week with our annual trip to Kalamazoo for WMU homecoming. 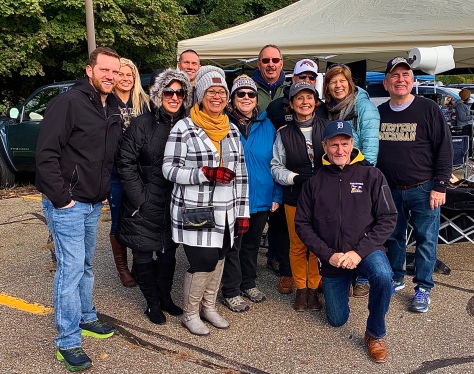 It’s always good to to be with our crew! After watching the Broncos beat Miami of Ohio, we headed back to our old dorm, French Hall, to check it out.

Here’s Diana knocking on the door of her old room. No one was there, unfortunately.

From Kalamazoo, we headed back up to our property in Leelanau County. We wanted to get some measurements and talk to the county building personnel while we were there. Knowing our land is loaded with maples, we were hoping our trees were colorful. 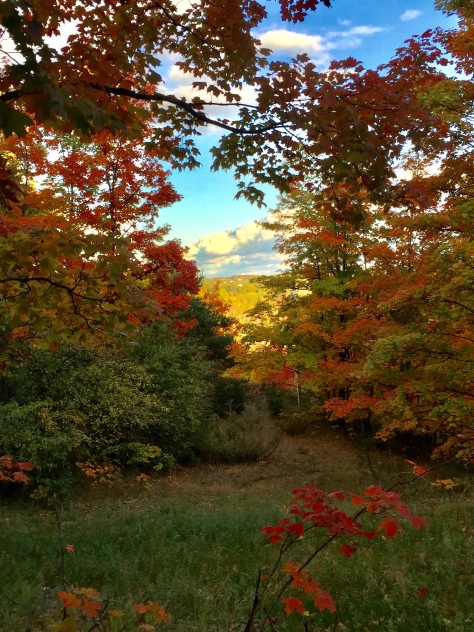 Needless to say, we were not disappointed!

It was very exciting to be able to experience our first autumn on our little slice of heaven! A note of interest: one month after this photo was taken, three feet of snow fell here. The scene is far different, indeed. With the temperatures plummeting, we made the decision to head south.

After stopping to see Diana’s sister and family in New Baltimore, Michigan, we headed towards Wapakoneta, Ohio. This tiny town is home to Neil Armstrong, the first man to walk on the Moon.

It is also home to the Armstrong Air and Space Museum, which is situated just a few yards from Interstate 75. We’ve driven by this unusually-shaped building many times since it opened in 1972 but have never stopped in. Fifty years and three months to the day of Neil taking that otherworldly step, we finally walked through these doors.

We were amazed at the amount of artifacts in this small museum, which included this space-flown shuttle tire that you could touch. It was far thicker than any tire I had ever handled. The exhibits also detailed the 25 astronauts that are native to Ohio. Some of the most famous are John Glenn (first American to orbit Earth) and Jim Lovell, the commander of Apollo 13.

Ohio is also the birthplace of Judith Resnik, a member of the crew of the ill-fated shuttle, Challenger. The small U.S. and Ohio flags to the right were in her personal bag that was recovered from the Atlantic Ocean floor. She was America’s second woman in space, having flown on the space shuttle Discovery in 1984. Not only was she an astronaut, she had a Ph.D. in electrical engineering, was a biomedical engineer, and an accomplished concert pianist.

And does anyone remember these? I drank many a glass of milk out of one of these as a kid. Libby Glass and Marathon Oil, both Ohio companies, manufactured and distributed these glasses during the Apollo missions. They have them for sale at the museum.

As we made our way through Ohio, Kentucky, Tennessee and North Carolina, we were surprised that we hadn’t gotten ahead of the autumn leaves changing color. The drive south was much prettier than we anticipated. Our goal was to stop and see Diana’s brother who recently moved to Franklin, NC. 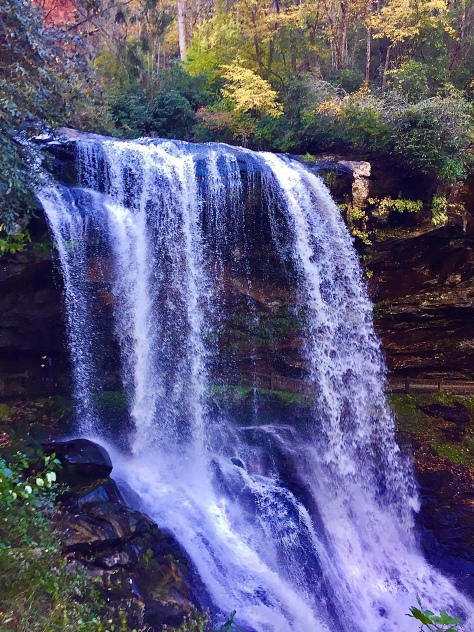 After setting up camp, we took a drive to see Dry Falls. This beautiful set of falls is located along US-62, one of the most twisty and narrow U.S. highways we had ever been on.

They were named for the fact that a person can remain relatively dry when walking behind them.

The next day, we spent the day with Dan, driving into Great Smoky Mountain National Park. Our destination that day was Clingman’s Dome, one of the highest peaks east of the Mississippi River.

Dan had been here in the past, having hiked this portion of the Appalachian Trail with a friend of his. 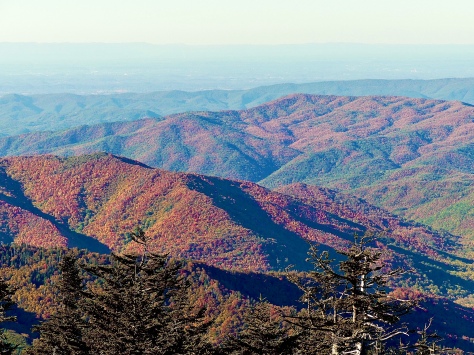 The colors from the top were outstanding. These mountains were where we drove out of the autumn display, as green leaves and palm trees soon took over as we headed further south.

Before too long, we made our way to Melbourne Beach and our little slice of Florida paradise.

We look forward to a winter filled with friends and rocket launches, so stay tuned for that. Until next time, safe and happy travels to all!