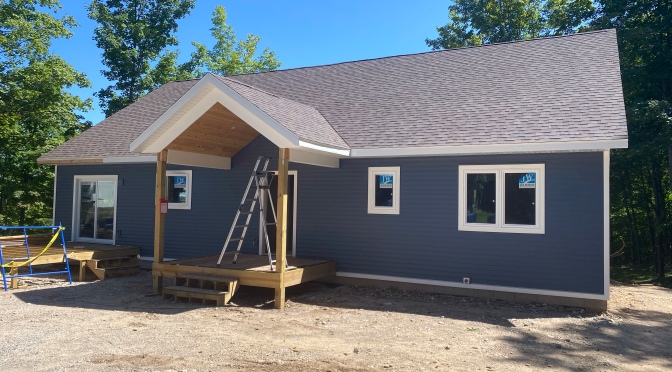 We’ve had some funny moments with our subcontractors this summer, and one statement in particular has stood out. One very busy day when a myriad of tasks were being completed, our plumber skipped off our porch, proclaining “S**t’s gettin’ done!” It’s been our mantra ever since…especially these past few weeks.

No sooner did I finish the siding on the west end of the cabin, the insulators showed up. Our choice for wall insulation was blown in cellulose, which is basically ground up recycled paper and cardboard. It’s mixed with a binder that allows it to stick between the studs.

That’s all fine and dandy, but it also means that I wasn’t going to be hammering on the outside of the walls to put siding up, as I didn’t want the insulation to fall out! So that meant waiting for the drywall to get hung before I could resume that activity. Within a few days, the drywall supply truck showed up.

A couple of days after that, the drywall hangers began working. While all that was happening, we decided to tackle the porch ceiling.

While Diana was putting the finishing touches on the pine carsiding, I was working on the soffit on the back of the building. Once the boards were dry, I put them up.

Once that was done, I proceeded to wrap the beams with white PVC. Never needs painting!

By the time I completed that project, the drywall was hung on the inside.

Once that was up, we were able to get the insulators back to blow 14” of cellulose into the attic. The cabin is fully insulated! The finishers start next week. And since the wall insulation is held in place by the drywall, I am able to get back at the siding.

It wasn’t long before the back of the cabin was completed. We will wrap the posts and finish the decks next year. And just how was it that I fastened that little top piece of siding in the peak of the porch? Well, here is a short video that explains the process:

Here I am on my new 12 foot ladder, installing the porch fascia.

Those two large pieces of white PVC in the peak were pretty tricky to get into place. That material is expensive, so it was a ‘measure twice, cut once’ situation. Or was it ‘measure once, cuss twice’?

I finished wrapping the windows on the front of the cabin this morning and put up most of the siding.

I should easily have that completed tomorrow. From there, it is on to the window wall! I will most likely complete that before the drywall finishers are done, so I am hoping to be able to get topsoil and grass seed on our hill below the big deck before moving inside to work. We’ve had a few gully washers recently and we need to stop the erosion.

On the social side of things, we have been fortunate to get together again with Diana’s cousin Jerry and our friends Lane & Patti and Rob, so it hasn’t been all work. Still we are in need of a break, so we have some visitors showing up this week and also next weekend. Stay tuned for that! Until next time, safe and happy travels to all!

20 thoughts on “It’s Starting to Look Like a Cabin!”