After spending Friday in Mid-town and the Lower West Side, we had a few more places we wanted to visit in Lower Manhattan.  Monday’s weather looked like it was going to cooperate, so we once again grabbed the 10:08 Metro-North out of Beacon and headed into Grand Central.  Once there, it was an easy subway ride on the Green 4-5-6 line down to the City Hall station.  One thing we failed to mention in the last post is that subway maps can be a challange to find.  If you are in Grand Central Terminal, go to the information kiosk in the center of the main concourse and ask for one.  They keep them behind the counter.  No charge, and they are a really nice quality map.

Our first destination was the Brooklyn Bridge.  This graceful span has fascinated me for as long as I can remember.  Begun in 1869 and completed in 1883, this mile-plus long structure was the longest in the world when it opened…by a whopping 50%!  The designer, John Roebling, purposely planned it to be six times stronger than it needed to be, and that is why it still stands today.  On average, over 100,000 vehicles cross it daily, along with 4,000 pedestrians and 3,100 bicyclists.

While the bridge was originally designed to allow rail and horse-drawn carriage traffic on the main deck, it always had a pedestrian passage in the center of the upper level.  Time to lace up the Asics and take a hike to Brooklyn!

The Gothic arched towers of Maine granite, in contrast with the hybrid cable-stay system of suspending the deck above the water takes your breath away.

When we came to the Manhattan tower, we were a bit concerned to see only John Roebling and his son Washington’s names on the plaque as having been the builders of the span.  Having read the book, The Great Bridge by David McCullough (a wonderful literary work that I highly recommend), I knew there was more to that story.  When the initial construction was underway in 1869, John Roebling’s foot was crushed between a ferry boat and the dock.  That led to his death from tetanus.  Reading the gruesome account of his demise reminded me of my grandmother’s description of my great-grandfather’s passing from the same disease.  It wasn’t lost on me that they were both builders of 19th century landmarks that still stand, German and named John.  Before Roebling passed, he put his son in charge of the project.  While working in the caissons way below river level Washington Roebling developed a case of the bends, which little was known about at the time.  He ended up permanently disabled and housebound in Brooklyn, so his wife Emily stepped in.  On her own she learned the advanced mathematics, physics, and engineering required to complete the structure.  From 1870 to 1883,  one determined woman oversaw the construction of this engineering marvel. 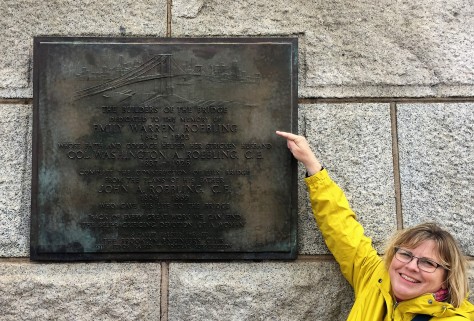 To say we were thrilled to see this plaque honoring her on the Brooklyn tower is an understatement. 🙂   It was fitting that she was the first to cross the completed span, riding in a carriage and carrying a rooster; a sign of victory.  You go girl! 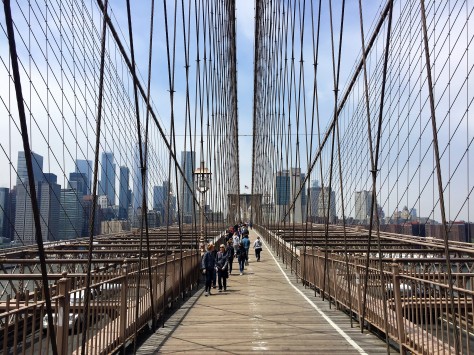 After crossing to terra-firma in Brooklyn, we turned around and headed back.  The overcast skies were beginning to clear!

Here are the buildings of lower Manhattan, as seen through the 135 year-old cables of the span.

The view really opened up when we reached mid-river.

What a great way to spend the morning!

Our friends Linda and Steven went to NYC last year, and suggested to us that we must visit Eataly!   After a quick Google search we found that one of the two locations in town was near the Brooklyn Bridge in World Trade Center 4, so off we went.

Along the way, we passed this beautiful fountain in front of City Hall.  New York has so many wonderful public spaces like this.

Eataly is a chain of Italian marketplaces/restaurants located around the globe.

Oh, my….so many choices!  We opted for a sit-down meal at La Pizza & La Pasta. 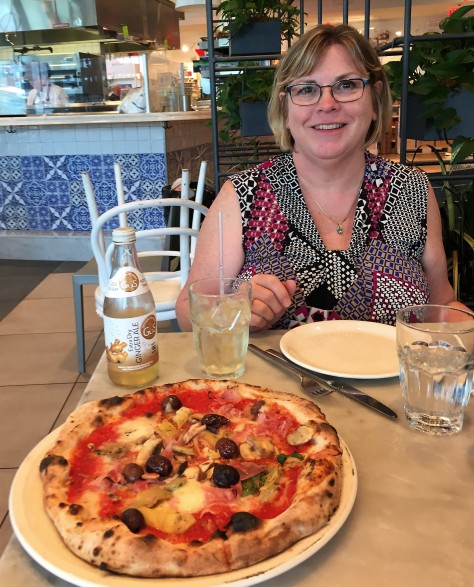 I selected the Pappardelle, although I chose a gluten-free substitute for the noodles.  They were tossed with peas, pancetta, spring onion, white wine, butter and parmigiano reggiano. Pared nicely, I might say, with a glass of Pinot Grigio.  🙂  We completed the meal with some of their decadent gelato.  Absolutely delightful!  We texted Linda and Steven afterwards and told them we loved them.  🙂

Before we left the restaurant, we stepped over to the large wall of windows and looked down at our next destination:  The 9/11 Memorial. 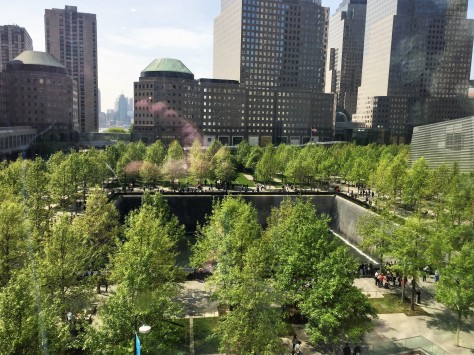 Through the 400 swamp white oak trees, chosen for their resiliency and strength, is the reflecting pool that occupies the footprint of the South Tower, known as World Trade Center 2.  We had visited this spot in 2007, back when it was a huge construction site.

Photos don’t do this solemn ground justice.  Two pools are placed where the 110-story towers once stood.  Water falls from the outside into the pool, then falls again into the void in the center.  The water seems to vanish, just as the people who perished here did.

Names of the victims encircle both pools, arranged with the people they worked with.  Above is Father Judge’s name; he died when the South Tower collapsed.  The diversity of names from around the globe really stands out.

We walked slowly around both pools, contemplating that horrible day in 2001.

Above it all rises the Freedom Tower, now taking the name World Trade Center 1 from the former North Tower.  Rising to 1,776 feet tall, it is the tallest building in the United States and is currently the sixth tallest in the world.

The names of the victims from Flight 93 in Pennsylvania and the Pentagon are also here, along with the six victims of the 1993 World Trade Center bombing.  When I saw Todd Beamer’s name, it hit me hard.  He was one of the men who stormed Flight 93’s cockpit to try to stop the hijackers.

We want to say that we consciously chose not to go to the 9/11 Museum at this time.  Friends who have gone say it is excellent, so you may want to look into it when you visit New York.  Thank you for respecting our choice.

After the memorial, we were drained…but we had a few more stops we wanted to make on our way back to the subway.  First was Trinity Church.

This beautiful Episcopal chapel stands at the head of Wall Street.

The church’s graveyard  is the final resting place of Alexander Hamilton, Treasurer of the United States.  He lost a duel with then Vice President Aaron Burr in 1804.  It was considered a legal duel, although it ended Burr’s political career.  By visiting here, we can now say we saw Hamilton in New York.  😉 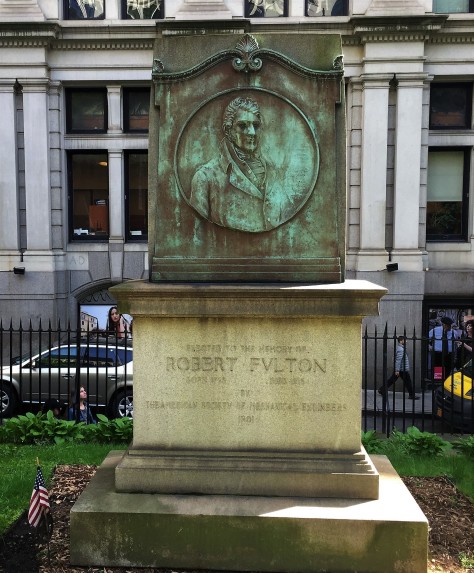 From Trinity Church, we headed to Federal Hall.

Even though this isn’t the same building, this is the spot where George Washington took the oath of office as the first President of the United States. 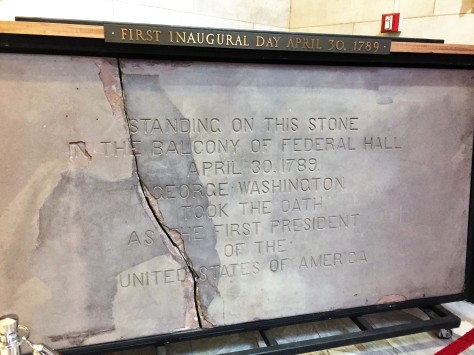 Inside is the stone he stood on from the first building.  It appears to have seen better days, but it’s cool that they still have it.

Leaving there, we were pretty much wiped out.  We boarded the subway in the Financial District to get back to Grand Central…at 5:15 PM.  Whoops!  That’s when the train cars become sardine cans, and we were standing with plenty of new friends.  🙂  The train stopped once and more people crushed in, then it was an express into the terminal.  We won’t make that mistake again.  😉  Once at Grand Central, we caught an express back to Beacon.  Along the way, we sat on the inland side of the train, seeing several deer along the route.  We were back at camp before dark, capping a really great day in lower Manhattan.

That wraps up our time in New York City for now. When we visited the first time in 2007, we toured the Statue of Liberty, had dinner at Tavern on the Green in Central Park, and attended a Broadway play. We look forward to visiting again, and discovering new adventures in the Big Apple. Our next post will highlight some of the fun things we did around Newburgh, so be sure to stay tuned for that.  Until then, safe travels to all!

18 thoughts on “A Stroll Through Lower Manhattan”