After spending a considerable amount of time in the desert the past few weeks, we crossed over the Laguna Mountains in Southern California and into the wonderfully cool temperatures of the San Diego region.  Our plans were to see Diana’s relatives who live in the area.  We arrived in Oceanside on April 27 and met up with Diana’s cousin Barry and his wife Dawn for dinner.

The next day, the four of us hopped the Coaster train to San Diego to do a little touring!

These tiled pillars in the Santa Fe Depot were fabulous!  The building was opened in 1915 and has been in use ever since.  It was built by the City of San Diego in an attempt to lure the Santa Fe Railroad to make it the western terminus for its transcontinental railroad.  Los Angeles ended up winning that competition. 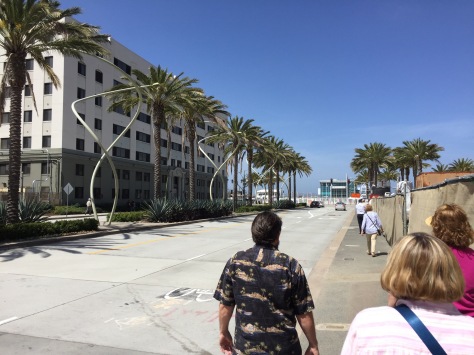 We walked to the bay to see the aircraft carrier USS Midway and to check out the waterfront.

I even kissed one of the pretty girls while we were there! 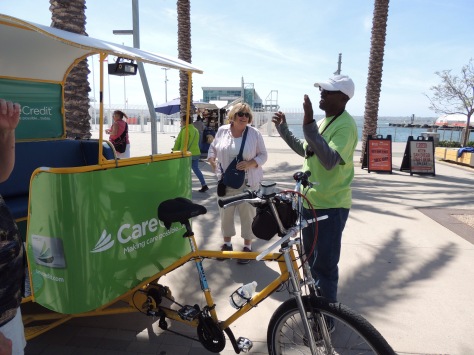 We had a nice lunch at the Cheesecake Factory, caught a pedicab back to the depot and headed back to Oceanside.  Our driver was very upbeat and entertaining, despite having to haul four adults across town.  😉

The next day, Diana and I hopped in the Escape and headed back south along the Pacific Coast Highway.

One of the surprises for us was the Veterans Memorial on Mt. Soledad.  There were semi circles of black granite tiles with veterans names, photos and stories inscribed in them.  Any U.S. veteran, living or dead, can have a plaque there.  Prices start at just under $1,000 and go up, depending on the size of the tile.

From the top of the memorial, there was a tremendous view to the north… 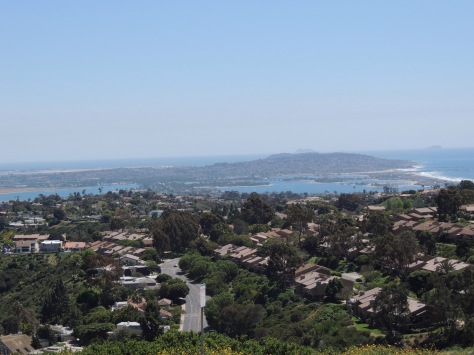 …and to the south!

From there, we skirted the western side of San Diego to visit Cabrillo National Monument and Old Point Loma Lighthouse.  This maritime sentinel had been on our list of places to see since way back at the turn of the millennium when we were members of the U.S. Lighthouse Society.  That organization featured the lighthouse at that time and caught our eyes.

Built on the top of 400 foot high Point Loma in 1855, the lighthouse was the highest in the United States during its 36 years of service.  It’s demise was brought about by the fact that it was too high to be seen by ships during foggy periods, resulting in the lighthouse keeper occasionally having to discharge a shotgun who warn passing ships.  To solve that issue, the New Point Loma Lighthouse was constructed in the late 1800’s at the base of the hill.

While it was a simple home in a remote location, the views from the windows of the harbor and the ocean made life here worth the hardships.

The next day, we got together in Oceanside with several of Diana’s relatives at a gathering that Barry and Dawn hosted at their timeshare. 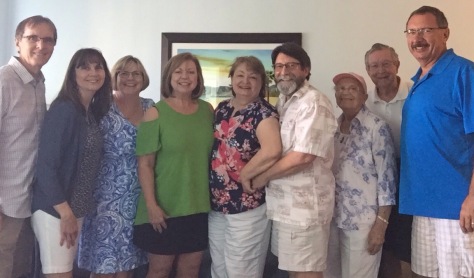 On the left is Gregg and Diana’s cousin Evie, who Diana hadn’t seen since she was in fifth grade. On Diana’s left is her cousin Sandra, who was visiting from Delaware.  Next is Dawn and Diana’s cousin Barry, then Aunt Barb and Uncle Don, then me.  Several of us went down to the beach to watch the sunset later on. 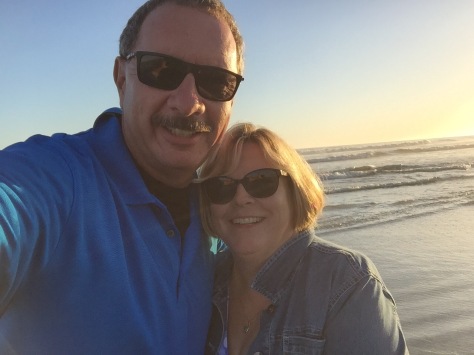 Diana and I finally put our feet in the ocean, marking the completion of our trip from the Atlantic to the Pacific!  Thank you so much, Dawn and Barry!  We had a fabulous time!

On Monday, Barry and Dawn took us on a tour northward from Oceanside up to Huntington Beach.  We made stops in San Clemente, Balboa Island and Huntington Beach, where they treated us to lunch.  We really enjoyed spending some quality time with them!

The following day, we went to see Uncle Don and Aunt Barb at their place in Escondido.  They took us out for lunch and we also spent some time visiting in their beautiful home.  It was great to be with them! 🙂

That wrapped up our time in Oceanside!  Next up, we move north to San Dimas to explore the Los Angeles area and to visit with friends and more family!  Stay tuned!

Old Point Loma and other Amazon items at our exploRVistas link by clicking HERE. 😊

12 thoughts on “Oceanside and San Diego”