Oh, my…..it is so much more beautiful that we remembered….

It had been nearly two years since we had found ourselves in Leelanau County, Michigan. On Thursday, we packed up the rig in Byron Center and prepared to head north.

A very big thank you to Richard at Woodchip Campground in Byron Center, Michigan for providing such a wonderful resource to the community by keeping the park open through the winter.  We had instances where the temperature dipped to 16 below zero, and we were never without power, water or sewer.  We encourage anyone needing a campground in the Grand Rapids area to contact Woodchip.

We made the three hour trip to Lake Leelanau in the afternoon, arriving at Wild Cherry Resort around 4 PM.

Take a look at our site!  We are parked at Latitude 45 degrees, 0′ 28″ north…less than 1/2 mile north of the 45th parallel.  For all intents and purposes, we are halfway between the North Pole and the Equator. 😃

And Diana is extremely pleased with her new commute!  Once we were set up, we had a very nice chat with our work camping colleagues, JoAnn and Paul.  We are really looking forward to working with them!

Following our chat, Diana and I headed a few miles west to the town of Leland to catch the sunset.

We arrived in plenty of time to watch the sun set over North Manitou Island, several miles out in Lake Michigan.  South Manitou is to the left.

Once the sun actually set, we were treated to a spectacular light show in the clouds!

On Friday, Diana worked with JoAnn, beginning the learning process of how to run the office.  I worked with Paul out in the park, setting up the lion’s share of the picnic tables.  Paul also gave me a tour of the resort, which is far larger than I thought.

After we finished up for the day, we were all invited to happy hour by Rex and Nellie.  They were full time RVers for 18 years, before coming off the road.  They have been summering here every season since the park opened, better than 10 years ago.  Rex mows the lawns in the park.  He is a D-Day veteran, and it is an honor to be in his presence. 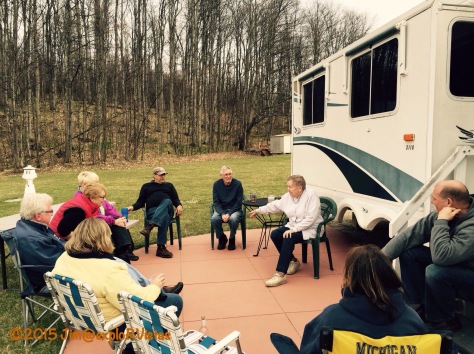 Also present were Rex and Nellie’s son Bruce,  Jim and Sandy, owners of the park, and Camilla, who will be helping some in the office.  She just started a new job as the executive assistant for the Leelanau Peninnsula Vintners Association. 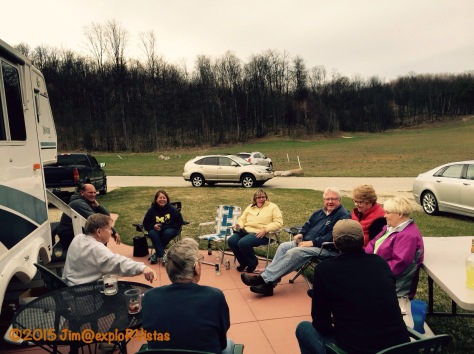 Everyone had a great time.  It was a very nice way to start the summer.

We look forward to posting more of our Northern Michigan adventures, as we plan on doing a lot of exploring throughout the summer. Stay tuned as we show this little slice of paradise!

25 thoughts on “North to Leelanau and a slice of paradise” 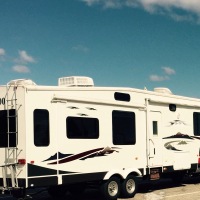