On Tuesday, March 27th, we packed up and began our journey towards Maine and then Michigan.

It took a little bit, as we had so many ‘see you in the fall’ goodbyes!   We will miss seeing everyone and look forward to next winter. We did manage to hit the road before noon.  🙂

Our first stop was Jacksonville, Florida, to take care of some errands and to do a little sightseeing. Diana tried out her new Moose membership to get us a nice little camping spot for two nights.  Wait…what?  Moose membership???  Let’s back up a step.  On Sunday, we met Diana’s sister Cheryl and her hubby Doug for lunch at the Beach House at Patrick Air Force Base. 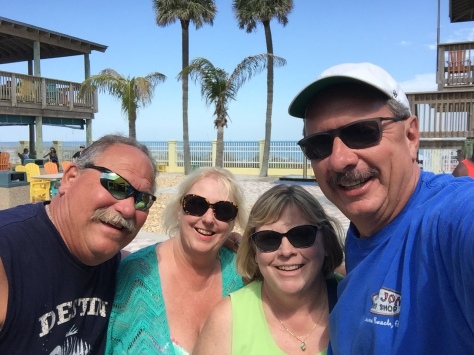 They are also fulltime RVers. Cheryl mentioned to us that she was a Moose member and how Moose International was not only a great fraternal organization, it also allowed RV parking.  We decided to have Diana join first to see if the membership is something we will use.  We met them next night at a local Moose lodge and with Cheryl as a sponsor and $35, she signed up!

Long story short, we ended up with a last minute overflow spot at a lodge in Jacksonville.  For $15 a night we has access to electricity, water, and a dump station….perfect!

First order of business was to get our mail in Green Cove Springs and head over to the DMV to renew our Escape and trailer plates.  We have always been impressed with our adopted hometown, in that they embrace having thousands of their residents be fulltime RVers, marine cruisers, and military.  Many of those folks never see the town after the first initial contact, but we like making an appearance at least once a year.  Tuesday was our second time through this season, and I have to say they outdid themselves.  We pulled into the parking lot at our mail forwarding service at 4:30 PM and grabbed the mail.  We then drove two miles to the DMV and were in and out by 4:45 PM.  That’s 15 minutes to take care of both items. Impressive, to say the least!

So that left Wednesday free for us to explore the area around Jacksonville. Looking for anything that fell under the National Park Service auspices, Diana found Timucuan  Ecological and Historic Preserve (pronounced tee-moo-kwan). This vast area encompasses several national and state sites, not far from a major city.  It was donated in the 1960’s by a man named Willie Brown.  He was offered millions of dollars by developers, but he wanted it saved as an unspoiled wilderness for future generations. On this particular day, we chose three locations. 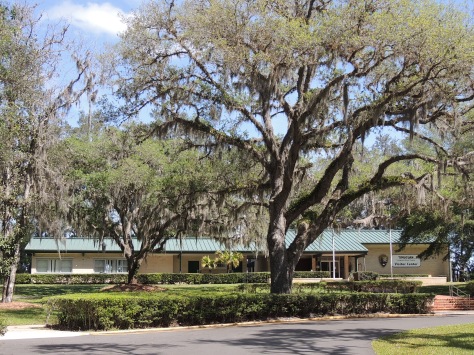 This is where the main visitor center for the entire preserve is located. Inside, the story is told of  this place where the waters of the Atlantic Ocean and St. Johns River meet.  There is evidence of over 5000 years of human habitation that has been unearthed in the area.  The first people here were the Timucua, a broad group of several tribes of natives. Sustained by the marine life found in the salt marshes, and also by plants and animals of the land, these people thrived here for centuries.

This wooden owl was found in the preserve and is estimated to have been carved in the 1400’s.  It is the largest wooden effigy ever discovered from an archaeological site in the Americas.

This yellow pine dugout was also unearthed here.  These canoes were the mode of transportation used on the St Johns waters by the Timucua.

In 1562, a French expedition, led by Jean Ribault, landed here and claimed the land for France.  Ribault left 50 settlers to establish an outpost and returned to France.  In 1564, the French built a triangular fort and named it ‘le Caroline’. 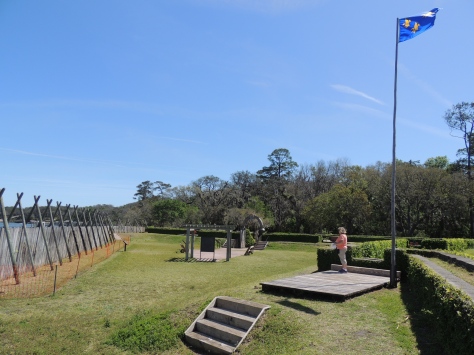 The French did not do well in this new land and were facing starvation when Ribault arrived with help from their homeland. The relief increased the population, and also caught the attention of Spain.  The Spaniards soon established a claim to the south at St Augustine, with the intention of dislodging the French to their north.  Ribault sailed south to attack the Spanish post, only to encounter a hurricane that disrupted his ships and he beached too far south.  Admiral Pedro Menendez seized the opportunity and marched north to Fort Caroline.  His men massacred 140 French people, sparing women and children. 40 to 50 French escaped and were able to sail back to France. He then marched south and found the shipwrecked men.  The French pleaded for mercy to no avail.  Menendez killed 350 of them…all but those professing to be Catholics or musicians. That site became known as Matanzas, a Spanish word meaning ‘slaughter‘.  After driving out the French, the Spaniards took over Fort Caroline and renamed it San Mateo.  In 1568, the French returned for the sole purpose of seeking revenge. They killed most of the Spanish at the former French outpost, except for a few who escaped to St Augustine.  After burning the fort, the force returned to France.

From Fort Caroline, we drove northeast to  Kingsley Plantation.

Along the way, Edsel 2 took his first ferry ride!  As you can see, Diana is sporting her Fort Caroline Junior Ranger badge.  🙂

Kingsley Plantation was built in 1798 and is the oldest surviving plantation house in Florida.  No small feat, considering it’s exposure to hurricanes, termites, fire, and humidity.  The story is told here of plantation life, with the owners fortunes amassed at the expense of slaves’ labor and freedom.

Located on the St Johns River, the farm was perfectly situated to transport its goods via water.  Cotton was king here, as was indigo, and sugar cane.

Near the entrance to the property were the remains of the slave quarters, laid out in a semi-circle.  These 23 structures housed 60 to 80 men, women, and children.  They are made of tabby. This construction material is oyster shells cooked with water and lime, and then mixed with sand to form cement. The horrors of slavery were well portrayed here, serving as a reminder of this disturbing time in American history.

Our last stop was Ribault Club. 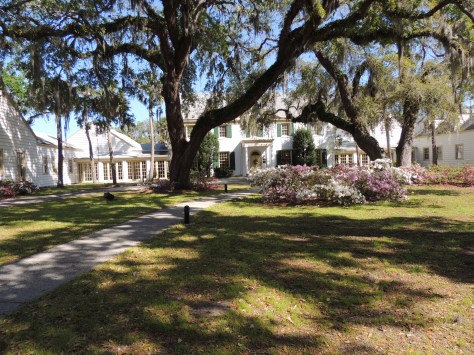 This was a millionaires resort built in the 1920’s.  During the depression, membership declined and the building fell into disrepair.

The State of Florida acquired the property in 1989, and through a partnership with the National Park Service and the City of Jacksonville, restored the club in 2003. 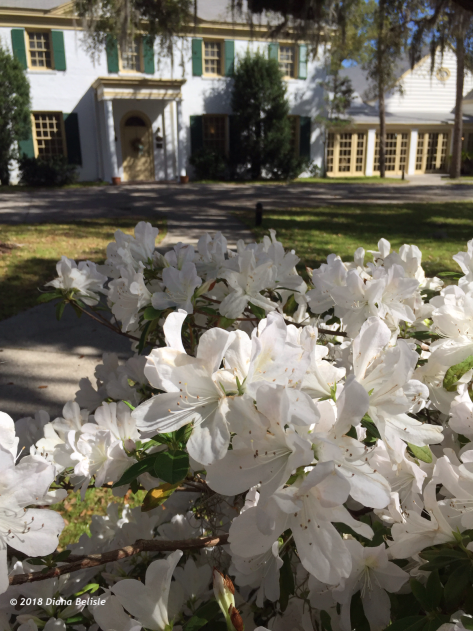 The building is used mostly for weddings and events, and is open for the public to view at other times.

We really enjoyed discovering Timucuan Preserve on what turned out to be a beautiful day.  We left several sites to explore at a future time, making sure we thoroughly soaked in the beauty and history the areas we visited.  Be sure to follow along to see our next adventure as we head north along the eastern coast.

20 thoughts on “Timucuan Preserve and Jacksonville” 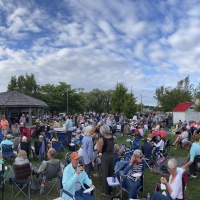 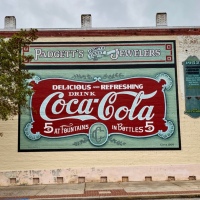