As stated in our last post, we are spending the month of June volunteering for Oregon State Parks as interpretive hosts at Heceta Head Lighthouse.  Located between Florence and Yachats, this sentinel has been guiding mariners since it was first lit on March 30, 1894. 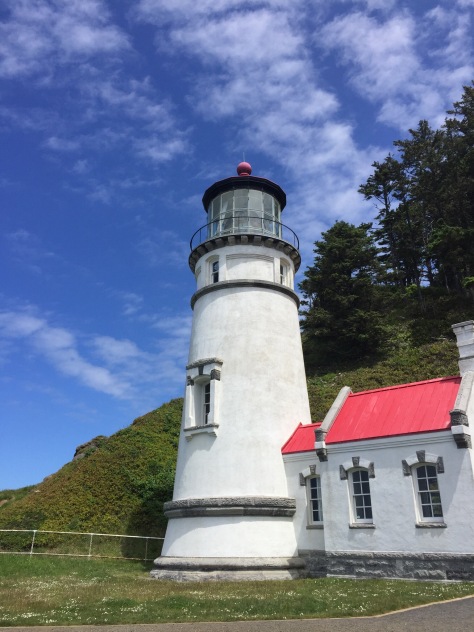 Standing at just 56 feet high, the building’s stature could be considered somewhat short. 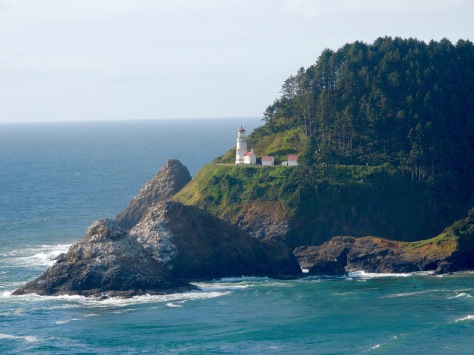 It is the commanding position on the headland that gives the lighthouse the height it needs to send its beam out 21 miles to sea.  The curvature of the earth is the only thing that limits it from projecting further. The focal plane of the bullseye on the lens above mean (average) sea level is a whopping 210 feet!

Back in 1775, a Portuguese explorer named Don Bruno de Heceta was sent by Spain on a mission to chart the waters from San Diego north to the Arctic Circle.  When he reached the waters off of the headland where the lighthouse sits today, he noticed that there was a large shallow area several miles from the shore.  That ridge of seabed became known over time as Heceta Bank, and is actually a raised area on the edge of the North American Plate.  Subsequently, the headland itself became known as Heceta Head.

Fast forward 75 years to the Westward Expansion and the California Gold Rush.  With the surge in ship traffic up and down the coast, there was a need for reliable navigational aids.  The U.S. Lighthouse Service received congressional appropriations for lighthouses in California and Washington, but it took longer to fill in the dark voids along the Oregon shore.  The last area to be lit was from present day Newport down to Winchester Bay.  Three locations were chosen:  Yaquina Head Light at Newport, Umpqua River Light at Winchester Bay and Heceta Head Light, halfway between the other two. Construction on Heceta Head began in 1892.  Considering the rocky coast and the fact there was only a rough wagon road over the headlands to the site, the project was a formidable challenge.  Some of the materials were brought in by ship and unloaded into smaller surf boats and rowed ashore.  Others were brought around the headlands to the south at low tide on calm days.  Still others were brought over the wagon road. Considering those challenges, it is quite amazing to note that the lighthouse, the two oil houses, the keepers house and the assistant keepers duplex were all completed by 1894.  On March 30 of that year, the first keeper lit the kerosene lamp in the first order Fresnel lens and Heceta Head Lighthouse was officially in service.﻿ 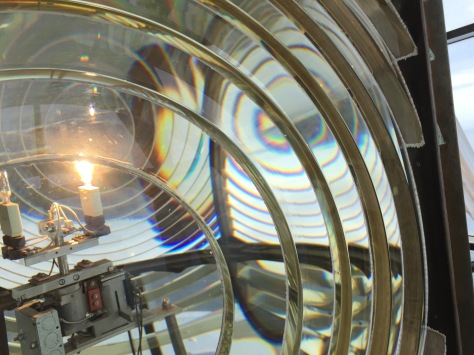 The Fresnel lens that was used at the lighthouse was made by Chance Brothers in England.  Most lighthouse lenses in the United States came from France and were made out of silica based glass, which had a greenish tint to it.  Chance used a sulpher based glass which gave the optic a slight yellowish hue.  It was found that the Chance Brothers lenses actually had a higher candlepower, due to that color difference. At the time that Heceta Head used a kerosene lamp, the output of the lens was rated at 80,000 candlepower. 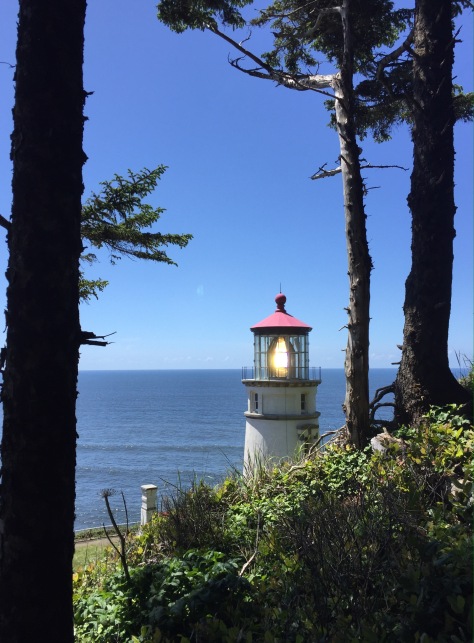 The current 1000 watt bulb increases the output to 2.5 million candlepower, a full 500,000 units brighter than a comparable silica glass lens!  As a result, Heceta’s light is the brightest on the west coast.﻿

When the lighthouse was first opened, the 4000 pound lens rotated one revolution every 8 minutes.  There are 8 separate panels of prisms, each radiating from a bullseye in the center of each panel.  As each bullseye would align between the light source and the mariner’s eyes, the entire panel would flash.  As a result, Heceta’s signature was one white flash every minute.  Each lighthouse has its own unique signature, so mariners are able to tell where they are at by timing the flashes.  When Heceta changed from a hand wound clockwork mechanism to an electric motor, the lens speed was increased to one flash every 10 seconds.

Touching on the original clockwork at the lighthouse, it was powered by a 200 pound weight that would descend from the lens to the watchroom floor.  That took 39 minutes to go that distance, and resulted in the keepers having to constantly climb the steps and rewind the mechanism.  A request was made to the Lighthouse Service for permission to cut holes in the watchroom, service room and first landing floors, so the weight could descend to the base of the tower.  Permission was granted and the modification was completed, which increased the winding interval to 4 hours.

There were three keepers that worked rotating shifts to maintain the light at Heceta Head.  Their responsibilities included filling the lantern with kerosene oil, winding the mechanism, polishing the lens, painting and whitewashing the buildings and general cleaning and upkeep of the lightstation. Things began to change in 1932 when the Oregon Coast Highway was built, which passed within yards of the station.  Electricity came on the heels of the road in 1934, and the oil-fired lantern was replaced by an electric light bulb.  That eliminated the soot on the lens from the kerosene, which resulted in less cleaning. Following that, the clockwork was removed and replaced with an electric motor.  With the decreased workload, the Lighthouse Service eventually reduced the quantity of keepers from three to two.  The head keeper was moved into one half of the assistant keepers duplex. The main keepers home was sold for $10 with the stipulation that the buyer must dismantle and remove it.

With the onset of World War II, there were heightened concerns of Japanese attacks along the west coast.  Defenses were built all along the shore from Southern California to the Canadian border. Heceta Head became host to a bevy of Coast Guard personnel, along with what was described as several vicious guard dogs. Patrols originated from the station to the north and south.  A couple of barracks buildings had to be built where the former head keepers house was, and it was noted that perhaps they had removed the first structure a little too soon.  Once the war was over, the barracks were removed.

In 1963, the lighthouse was fully automated.  All of the windows below the lantern room were sealed over to prevent vandalism. Occasional maintenance was undertaken by the Coast Guard to change the light bulb, grease the rollers the lens rotates on and clean the windows.  In the 1960’s, the Coast Guard turned over the lighthouse to Oregon Parks and Recreation, except for the lens and one oil house.  Those were deeded to the state park at a later date.  The assistant keepers house is owned by the U.S. Forest Service and is leased as a bed and breakfast.﻿ 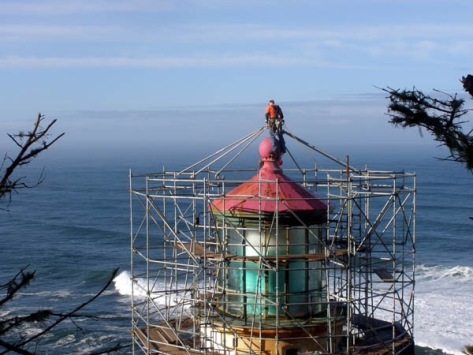 In 2012, a major restoration was undertaken to restore the lighthouse.  Today it stands proud on the headland shining its beam through the same lens it did 123 years ago.  Diana and I feel extremely fortunate to be able to showcase the beautiful sentinel this month, and to foster interest in the history of the location.  We have met people from all around the globe who have come to visit the beacon.  It’s that sort of curiosity and interest that ensures Heceta Head Lighthouse will still be shining brightly 123 years from now! 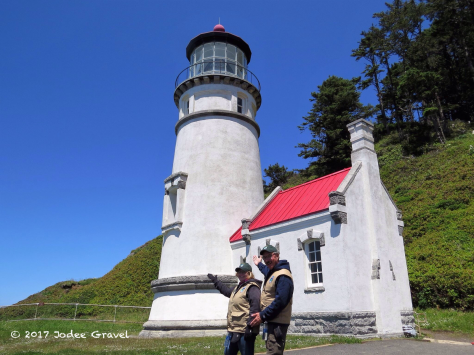 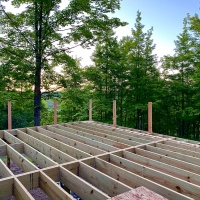 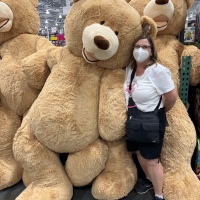 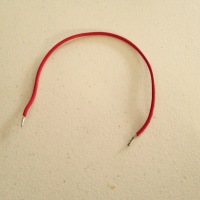