After a very full day on Wednesday, May 10 at Sequoia, we planned to spend Thursday getting caught up on chores and such.  We planned our visit to Kings Canyon for Friday, still not totally sure what we were going to find there.  We seriously considered skipping it all together, as a quick check of Google Street View wasn’t revealing much more than a tree-lined road.  Well, something stirred in us that Thursday morning and before we knew it, we were in Edsel and headed for Sequoia’s brother to the north!

Rather than take the same road we took the day before, we decided to try the road that ran west of Sequoia through the foothills. What started out as a two lane road with painted lines quickly turned into a narrow country lane, somewhat reminiscent of the roads we experienced in Kentucky.  I had to tame my inner Formula One driver, so as to not go over the side. 😉. The road gained elevation as we went, eventually leading us to the entrance to Kings Canyon. 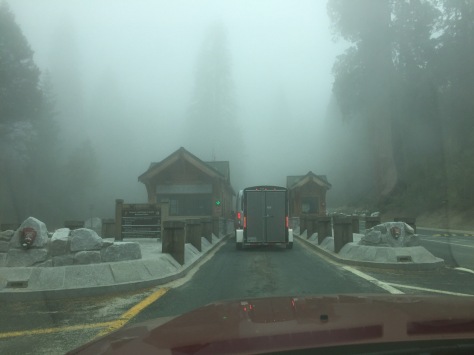 Looking at this photo and the previous one, it’s hard to believe they were taken an hour apart!  Our fears of a cloudy day soon dissipated as we drove further into the park.  We stopped at the Grant Grove Visitor Center to gather more information about Kings Canyon and ended up speaking to Ranger Meredith, a seasoned dynamo full of enthusiasm for her beloved workplace.  That stop paid off in gold as the day progressed. As we headed to the heart of the canyon, the road actually leaves the park for a stretch and enters Giant Sequoia National Monument.

This outstanding area was elevated to monument status in 2000.  The road through it is the only way to get into the main portion of Kings Canyon. With most of the turnouts on the opposite side of the road, we opted to catch them on our way back home.  Seeing what we had to look forward to was like knowing we were going to have a great dessert after our meal.  😃

One thing Ranger Meredith asked us was “Any geologists here?”  We expressed our interest, so she told us to go exactly 1/2 mile past Boyden Cave and look at the rock wall on the driver’s side.  She said that even though there isn’t a pulloff, stop in the road and take a photo…and if the cars behind us didn’t like it, too bad.  😉

Wow!  I guess this says a lot about the makeup of subterranean California!

From there, we headed upriver to Grizzly Falls.

This powerful torrent was the culmination of Grizzly Creek just prior to it entering the Kings River.

From there, the road re-entered the national park.  Our next stop was Roaring River Falls.

It definitely was roaring!  Diana asked a NPS trail worker what we could expect to see in July, if we had come then instead.  He said that the river would actually be higher in July, as the warm temperatures would be melting the mountain snowpack more quickly than it currently was.

From there we went to Zumwalt Meadow.

We crossed this suspension bridge along the way. 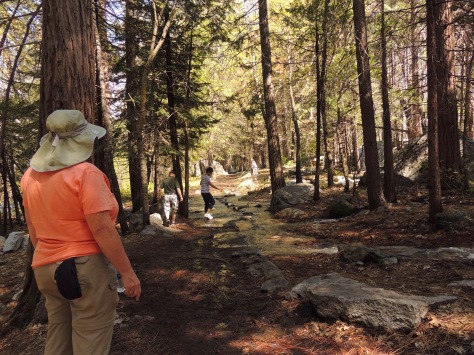 We also had to cross over this flooded pathway, as a small creek was over its banks in this section of the trail.

This was the payoff at the end of the trail!  It was a very peaceful place to be.  From this point, the road went just a little farther to a place called Road’s End.  Diana spoke with three hikers there who had crossed the Sierras from the east.  It took them six days.  They had snowshoes as part of their gear, and they mentioned that there still is a lot of snow at the higher elevations.  There are several trails that leave from Road’s End that are more our speed, and we definitely want to return to try them in the future.

Heading back out the same road, we had a little surprise along the way.

Three wide load trucks with what appeared to be some sort of temporary housing units on the back came by!  I was over as far as I could possibly get, and had a few thousand foot drop off to my right.  Yikes! 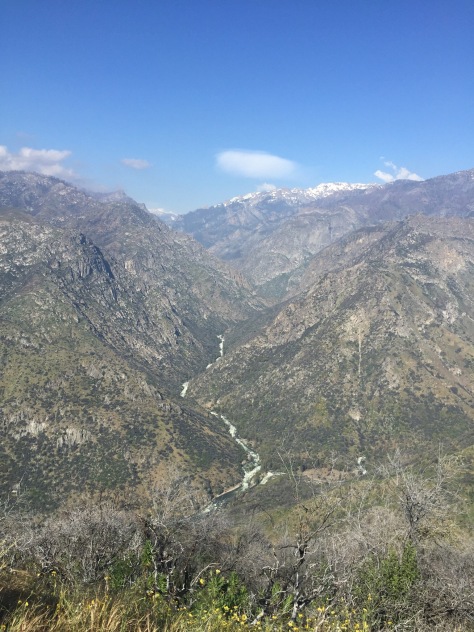 The difference in height between the river and the mountaintops is around 8200 feet, making Kings Canyon one of the deepest canyons in the United States!

As I stated earlier, we almost didn’t make the trip that day.  The next morning, the clouds hung at 2000 feet, so we wouldn’t have seen much of anything.  We were glad we made the effort when we did, so we were able to see the spectacular scenery that Kings Canyon has to offer.

Though it is a bit of a challenge to get to, take the time to experience it.  You won’t be disappointed!

Next up, we head towards Napa Valley!  Be sure to stay tuned!